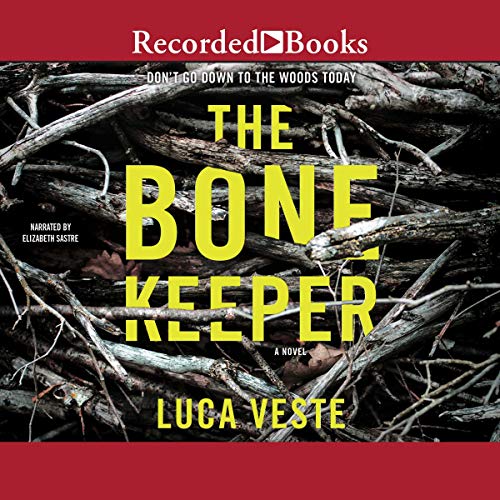 By: Luca Veste
Narrated by: Elizabeth Sastre
Try for $0.00

"The Bone Keeper will corrupt your days and shatter your nights." (Val McDermid)

"A dark and brilliant thriller from a writer who just gets better and better. The Bone Keeper is tense, chilling and HUGELY scary." (Mark Billingham)

"Luca Veste proves you don't need to go to the Bayou or the Everglades to find something terrifying in the deep, dark woods. Sometimes evil is lurking just around the corner. An entertainingly nasty piece of work." (Christopher Brookmyre)

What if the figure that haunted your nightmares as child, the myth of the man in the woods, was real? He'll slice your flesh. Your bones he'll keep.

Twenty years ago, four teenagers went exploring in the local woods, trying to find the supposed home of the Bone Keeper. Only three returned.

Now, a woman is found wandering the streets of Liverpool, horrifically injured, claiming to have fled the Bone Keeper. Investigating Officer DC Louise Henderson must convince skeptical colleagues that this urban myth might be flesh and blood.

But when a body is unearthed in the woodland the woman has fled from, the case takes on a much darker tone.

The disappeared have been found. And their killer is watching every move the police make.

What listeners say about The Bone Keeper

This book has great pacing and an addictive quality. The mystery is engaging and well crafted. I highly recommend it!

Its not a bad book, for s psychological thriller. It was good up until 3/4 of the book and then fizzled out at the end. I would still recommend as a decent book.

We are,seeing lots of these
psychological suspense books - with or without supernatural twists - flooding the market. Very seldom is a really good one
launched out there in book land