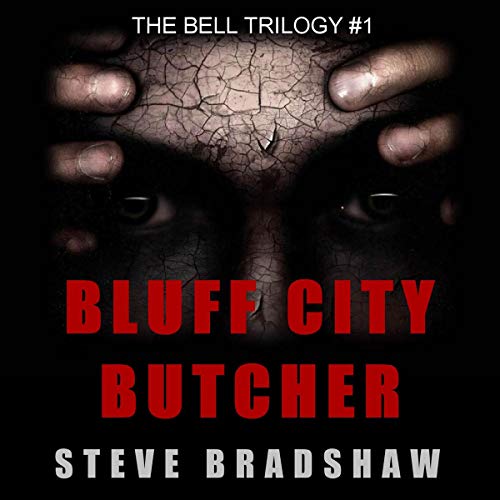 Second edition - approved by the author.

The Bluff City Butcher was once just an urban legend. Now a real monster has stepped out of the fog of a century-old mystery and thrown a midsouth community into unbridled terror. When world renowned forensic pathologist Dr. Elliott Sumner gets the call from the Butcher, he knows he's not dealing with just any serial killer. Not only is the BCB a genius and psychopath, he is the genetic recipient of a legendary mutation some would kill for.

Elliott's battle with his own inner demons could get in the way of stopping the very real monster. But will ending the reign of terror of the Bluff City Butcher solve the century-old mystery? Or will it put an end to the single greatest evolutionary leap for mankind?

What listeners say about The Bluff City Butcher (Second edition)

Set aside time to binge read this book!

There are books we read for simple distraction, then there are the books that sweep you up and drop you into the story! Set aside time for this one, because you will not want to do anything else while you are “reading” this one! The character develop emend and scientific detail is fabulous! I love a good complex story. Though there is a lot of detail in this one, it’s put together in such a concise manner that the reader follows it effortlessly! It doesn’t take long for the narrator to become one with the natural reading “voice in the brain” and you almost forget it’s an audiobook! Overall great experience.

Let me start off by saying, I really enjoyed the book. I thought it was engaging, gory in the right ways, and I liked the twist at the end. But I had a hard time with some of the characters. There were too many and I forgot who was who! The narrator did a good job with the voice changes but after a while, they all started to sound the same.

I loved the story though. The antagonist was brutal in his killings and I know it sounds weird but, I liked the gruesomeness of them.

Overall, it was a good book and I would recommend it to anyone that likes crime stories.

I found the story very disjointed with so many parts that were supposed to come together in the end, and it failed. The beginning was very confusing and all mixed up, and it took too long to come together, that it lost most of the plot and excitement.
I did not enjoy this one very much, I kept looking forward to the end, so that things can make sense eventually.

So, off the bat, I kept falling asleep with the narrator’s slow lilting voice. I then adjusted the speed of his narration and bingo!

I do believe I am becoming a fan of Mr Bradshaw. This is the second book I have listened to and I like his style. I can tell this author knows his stuff.

Well done to a great book! I shall definitely keep an eye out for you other books!

Well, at times my head was spinning under the different weights of all the various threads weaving the magic carpet of intrigue that is the story of Bluff City Butcher. At the beginning, I wasn't sure how the very disparate stories would come together. But come together they did, and then some. The only negative for me was the narrator, Stephen H. Marsden. Don't misunderstand me, he did a good job, but his accent didn't appeal to me and his pronunciation of Gilgamesh absolutely irritated me, like fingers down a blackboard. But appreciation of accents and different pronunciations of words between the UK and the US is often an obstacle. It certainly wouldn't stop me from recommending this book to other people; it's a very personal preference. An intricate tale, carefully crafted, well done Mr Bradshaw!

This isn't a story you can half listen to as you will miss so much and get very confused.

The story starts of very complicated with lots going on but by the end all of it tied up very nicely and made so much sense.

It is a brilliant book, which kept me wanting to listen all the way through and I absolutely loved it

Having previously come across Dr Elliot Sumner in Terminal Breach, a later adventure, I was very curious to dig into his past - I mean who doesn’t love a genius serial killer hunter haunted by his own demons?
I love how Steve Bradshaw layers his stories - initially they come across as quite complex, with many protagonists, places and threads, but they all work by themselves and it all ties nicely and most satisfactorily together in the end.
The narration was mostly great, maybe a little too American for the bits set in the UK, but it didn’t really interfere with my enjoyment - I liked Stephen H Marsden’s voice a lot.
Great characters, great writing, enjoyable narration - all in all a fabulous start to the trilogy and I’m looking forward to the next Elliot Sumner adventure.

Having read a later adventure with this protagonist (Dr Elliot Sumner), and this tale being referenced, I was extremely happy to have a listen, and I'm glad I did.
With a great pace, intelligence and excellent prose this serial killer, cat and mouse chase proved a very engaging read. It was quite a twisty, initially complicated seeming story, with many threads, but as the characters got fleshed out (the serial killer and their motives made for very refreshing reading, and I got to learn more about Elliot and how he ticks) and I got used to the way the author told the tale, the chase quickened and it all gelled. The ending was logical and satisfying, bringing this tale to a good close.
The narration was superb, paced well and with a great inflexion of all the huge cast of characters.
This is the first of a trilogy and I have already bought the second and third on kindle initially as I definitely want to carry on the adventures of Dr Sumner.

The title of the book pulled me in straight away. I do love a good serial killer story!

There are lots of threads to this story, and I occasionally found it hard to follow, but eventually all those threads came together and I really enjoyed this forensic thriller. I loved the location of Memphis, and Mr Bradshaw’s descriptions helped me to picture the setting even though I have never been there. The characters are well developed and interesting. I will definitely be listening to the next in the series.

Wow, what a book. Probably the most complicated audio book I've listened to, but it certainly kept my attention and the story went in directions I wouldn't have guessed. There were a large number of characters and at first I struggled to understand what was happening, but once I was into it I really wanted to keep listening. This is definitely a book I'd recommend listening to in large chunks. The topic was complicated and on occasions I had to listen to bits again to understand the story fully, but the storyline and need to know what happened meant this wasn't a problem. I will definitely be looking out for the other books in the trilogy as I want to know what happens next.

A twisty turny rollercoaster of a book.

I enjoy horror as a genre and like reading about murders and forensic cases. The author has a background in this area so his descriptions were very realistic and well-researched. I enjoyed the book and will certainly check out the others in the series.

What I struggled with in the early chapters was just how perfect Dr Elliott Sumner is. I mean seriously! How can he possibly have done all of the things he's meant to have done at his age? I like my heroes to have some flaws - it makes for a rounded character and is more interesting. He's just too perfect to be believable. But once I got past that I really enjoyed the story.

The narrator had a good voice for the subject matter- nice and deep. Some of his pronunciations were 'quirky' but they didn't spoil the book for me.

If you like this genre I recommend that you read this book.

I was pulled in instantly to the audiobook version of this story. It’s characters were chunky & good to get to grips with. The storyline was great, I honestly had a completely different idea in my head as to what was going on. The actual happening was a What moment & I loved it.
A good all round thriller murder story
Narrator was very good. Nice deep voice.

A complex and lengthy story written by an expert in the field of bio medicine. A clever storyline which ultimately explains the extraordinary gifts of Dr Elliot Sumner, forensic pathologist and serial killer hunter. This is the first instalment in the Bell Trilogy - it will very be interesting to see how this plays out over the next two books.

I loved this audio book. It is amazing and I highly recommend this.
I was given this for my honest and impartial review, which I have freely given. Brilliant storyline and great characters. Can not praise it enough.👹🤧😱