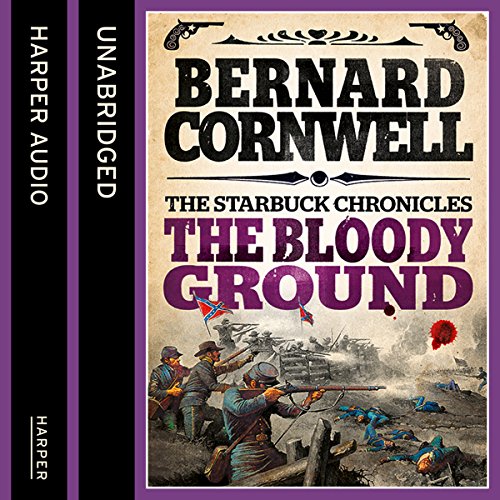 By: Bernard Cornwell
Narrated by: Andrew Cullum
Try for $0.00

The fourth volume of Bernard Cornwell's best-selling series on the American Civil War and featuring rebel Nathaniel Starbuck - a yankee fighting for the Southern cause.

It is late summer 1862 and the Confederacy is invading the United States of America.Nate Starbuck, a northern preacher's son fighting for the rebel South, is given command of a punishment battalion - a despised unit of shirkers and cowards. His enemies expect it to be his downfall, as Starbuck must lead this ramshackle unit into a battle that will prove to be the bloodiest of the Civil War.

What listeners say about The Bloody Ground

I really love these books and hope that Cornwell gets around to finishing the story. I realise that the money was in writing the Sharpe books another favorite of mine but that wasa while back and there is such a rich backdrop in the American Civil war for Nate to be involved in.

What was one of the most memorable moments of The Bloody Ground?

The battle of Antietam

Which character – as performed by Andrew Cullum – was your favourite?

The last in the Starbucks series-so far-and a riving listen as well as giving an insight into the American Civil War not easily found elsewhere.

Shame it is the last book, excellent series

Would you consider the audio edition of The Bloody Ground to be better than the print version?

Not read the printed version

What was one of the most memorable moments of The Bloody Ground?

The final battle described so well as usual by Mr Cornwell, just wish I had a map to hand

Listening to the first book in the series I worried about Andrew and the accents, he was a little inconsistent, but as the series has progressed he got into it and brought the characters alive. I would now seek him out as a narrator, it was a pleasure to listen to him.

Being a long standing fan of Bernard Cornwell and his English historical fiction I was not sure how he would "travel" to America. However the evident extent of his research and his own "take" on historical fact shines through in this series to make it hugely entertaining.

Wish mr Cornwell continued the story through the war. I have read all the authors books. Fantastic author

A great conclusion to the current run. I hope in time Cornwell finds his way back to add another title.

good story but stopped before the end of the book

why are the historical notes left out of this series. It's a part of the story. The narrator didn't do Bush the story.