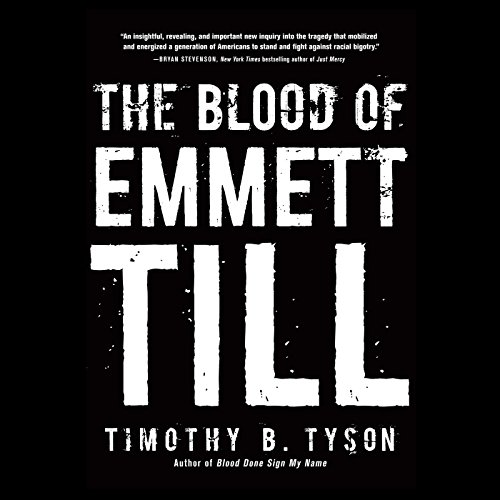 The Blood of Emmett Till

By: Timothy B. Tyson
Narrated by: Rhett Samuel Price
Try for $0.00

Mississippi, 1955: 14-year-old Emmett Till was murdered by a white mob after making flirtatious remarks to a white woman, Carolyn Bryant. Till's attackers were never convicted, but his lynching became one of the most notorious hate crimes in American history. It launched protests across the country, helped the NAACP gain thousands of members, and inspired famous activists like Rosa Parks to stand up and fight for equal rights for the first time. Part detective story, part political history, Tyson revises the history of the Till case using a wide range of new sources, including the only interview ever given by Carolyn Bryant. In a time where discussions of race are once again coming to the fore, Tyson redefines this crucial moment in civil rights history.

What listeners say about The Blood of Emmett Till

Tough read. Rest in Peace Emmit. We are so sorry!

I can't imagine being related to the devil. These flesh eating demons still exist today. This book told quite a bit, but I am not sure if it really served to reveal truth or threaten black families today. I almost didn't finish it because of the venom in each paragraph. We as a race have endured too much, we have had to be too understanding. Our will to survive is unmatched. God bless us all. Hold on to God's unchanging hand, put your trust in him because some of us have been to hell already and are on assignment with specific orders to eliminate Black people. The weapon has been formed, but it will not prosper. Thank you Jesus!

In 1955 an all-white male jury found the two white defendants not guilty of killing a black boy even though they had confessed to the crime. This is one of the worst incidents of “Southern Justice” in our nation’s history. The victim was a fourteen-year-old black boy from Chicago who was visiting a relative in Mississippi. The boy who had polio when younger was accused of provoking a white woman, Carolyn Bryant, with a wolf whistle and flirtation. Her husband, Roy Brant and her half -brother, J. W. Milan, then beat-up and lynched the boy.

Many books have been written about this case. What sets Tyson’s book apart is the broad view he used to examine the lynching. Tyson does an excellent job with the courtroom scenes. The book is well written and meticulously researched. Tyson examined the records including the trial transcripts and interviews of most of the people involved, including a rare interview with the late Carolyn Bryant. Apparently, Carolyn Bryant wrote her memoir. The manuscript and related papers have been sealed until 2038. The author delves into the social and economic forces that drove Roy Bryant and J. W. Milan to kill Till. Tyson then ties up the case to include the ongoing problems of inequality of justice for blacks today. Tyson is a historian at Duke University so the book is more academic than many books written on the subject.

The book is just over eight and a half hours long. Rhett S. Price does a good job narrating the book. Price is an actor and audiobook narrator.

This book is gut wrenching and melancholy.

This book is wonderful and it must be studied and lectured at all college campuses. This book gave me everything I wanted to know about each and every character in this book and gave the me the understanding of what misogynistic White Supremacy looks like....even through the eyes of Mrs Bryant and Mrs Till.

The text conveys the place and space, the historic context are all solidly portrayed to reveal how Emmett Till was brutally murdered in Money, MS by 2 men who, correctly as it turned out, fully expected their white superiority would never hold them accountable. It is a 1955 story that reveals much of the ugly American underbelly which, appallingly, continues to exist today on our streets, in our courtrooms, in our schools, our voting districts, our halls of government, and all across the USA whether North, South, East, and West.
Here, we see, in the bloody torture and murder of a 14 year old child, all our continued choice of ignorance over action, and all our Shame.

I loved the audio, the different tones of voices the narrator used was great. I highly recommend. this should be a movie. Great history sto6

Worth your time and attention

Powerful and important. This book shook me. A relevant history lesson for those choose to ignore it.

An amazing, truth-telling of the civil-rights history in America... I learned a lot of sad truths.

does not evade the real causation

The surprise was the description of the trial, I never would have guessed that a Mississippi
judge would have been scrupulously insistent on
conducting a fair trial.

This book gives alot of history of how civil rights started and how things are today.

An excellent in-depth explanation of the life and tragic death of Emmett Till and why his brutal murder still continues to impact our world today.