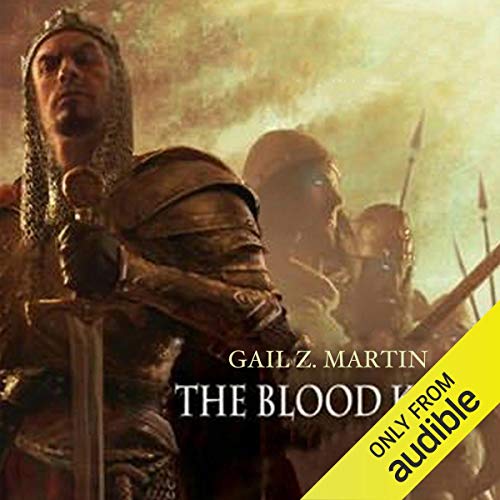 The second installment of the Chronicles of the Necromancer. Having escaped being murdered by his evil brother, Jared, Tris must take control of his magical abilities to summon the dead, and gather an army big enough to reclaim the throne of his dead father.

But it isn't merely Jared that Tris must combat. The dark mage, Foor Arontala, has schemes to raise the Obsidian King....

What listeners say about The Blood King

I liked it. It is definitely an interesting book. It kept me wanting to see what happens.

I had absolutely NO issues with finishing the entire series. Loved this as books (when I want the feel and smell of a real book in my hands) and loved the audio version just as much (for those times when my glaucoma won't cooperate). The story through out is intense with a lot of action and intrigue! HIGHLY recommend the series. Start with the Summoner, the books should be read in order.

A great sequel to the first book and the narrator once again did an excellent job.

loved it fron beginning to end masterpiece if i do say so. myself even better than the first book

loved this book. hope you do as well. it will sweep you up and take you away to a different land.

These books just keep getting better and better. Very rare I listen to a audio book but I can't get enough of this series.

I really enjoyed this sequel! So worth a listen! The characters grew and flourished in this book! Start with The Summoner and hold on for the ride!

I enjoyed the story. Interesting characters with a bit of humor to avoid too much darkness.
The narrator did an excellent bringing the story to life.

feels like this book was written by a computer processing an algorithm where the parameters are antagonist=person1, love interest=person2, spiritual=person3, academic=person4 blah blah blah you get the picture. Nothing original at any point, was a chore to listen to most times, wish I could get my money back but more importantly my time! avoid!!!!!

When I first read this book years ago, I absolutely loved it. However unlike her later books the chronicles of the necromancer feels like a good story hindered by wooden dialogue in places. The narration doesn’t help as his accents are all over the place and you can almost hear him cringing at some of the dialogue. Overall I’d give the series a solid 7 out of 10

I have loved these books, ever since they were first published. I really looked forward to listening to these books. It is such a shame that the narrator did such a poor job of telling the stories. I still love the books, but I doubt I'll listen to another book narrated by Peter Ganim.

Jonmarc Vahanion is my favorite character. I love his irreverent attitude to just about everything.

It could have been so much better if it had been narrated by someone else, someone who could read the dialogue with more feeling. It sounded very flat, and sometimes sounded ridiculous.

Do you think The Blood King needs a follow-up book? Why or why not?

I know that there is a follow up story, and I also know that unfortunately it is narrated by Peter Ganim, which means it will not be narrated as well as it deserves to be.

I could wish that these books had been narrated by someone else. I still love the books, and will still enjoy reading them, in printed format.