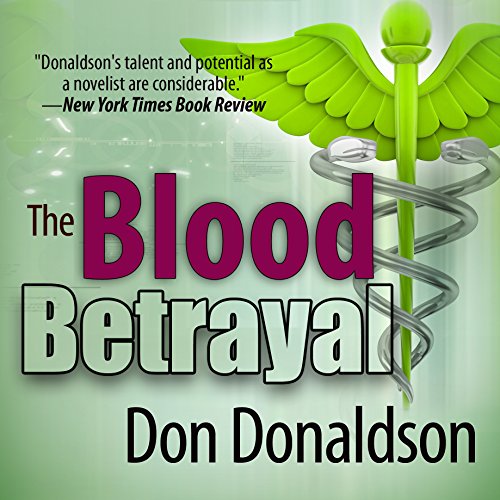 By: Don Donaldson
Narrated by: Peter Jacobson
Try for $0.00

When hematologist Dr. Carl Martin is called into a Little Rock emergency room, not even his expertise can save Benjamin Rasco from bleeding to death. But why did the man die? His condition shouldn't have been fatal. And no one should have such bizarre red blood cells.

Hoping to uncover a reason for the medical mystery, Carl travels to Rasco's hometown, an isolated, religious community nestled deep in the Arkansas Mountains. Instead of answers, however, Carl's faced with more questions - and a mysterious woman who stows away in his car.

Sheltered Beth Corbin only wants to see the world for a few days before returning to Artisan, where the town leaders discourage mixing with the outside world. But after talking with Carl, Beth becomes increasingly distrustful of those leaders, and the suspicions she's been harboring about the town become too intense to ignore. Together, Carl and Beth uncover an astounding medical conspiracy that not only affects all the residents of Artisan, but shatters every belief Carl ever held about himself.

Don holds a Ph.D. in human anatomy. In his professional career, he has taught microscopic anatomy to over five thousand medical and dental students and published dozens of research papers on wound healing. He is also the author of seven published forensic mysteries and five medical thrillers. He lives in Memphis, Tennessee with his wife and two West Highland terriers.

What listeners say about The Blood Betrayal

What made the experience of listening to The Blood Betrayal the most enjoyable?

There are so many books that use the workings of the human body as a mechanism for suspense without quite knowing how the body works. This one delivers though, Donaldson is at the cutting edge of medical technology, and it makes for a great mystery. The narrator, at the same time he's telling the story, is a member of the audience, working to solve the puzzles along with us. His voice doesn't call attention to itself but serves instead as a pleasant window through which we see the plot play out. Kudos to all...

Thanks for the excellent work...

Good book, not strong as hoped in medical departme

What did you love best about The Blood Betrayal?

Good suspense, esp. at the beginning with interesting plot.

What other book might you compare The Blood Betrayal to and why?

Early Robin Cook or Michael Palmer, but with less actual medical info and not quite the character developement

It was okay, understandable, good pace.

The first of book was more suspence-filled than second part. I did enjjoy it but would have liked more actual medicine or research emphasis along with the suspense and character. But I did recommend it for people who like this kind of book.

This is the first book in a long time that I looked forward to listening to. I listen on my dog walks -- two 45-minute walks per day.

Would you be willing to try another book from Don Donaldson? Why or why not?

Not sure. Though the story kept my interest, there were some parts I found implausible. One thing that made me wonder was the inconsistency of technology. With the lack of cell phones I thought the setting was maybe early 1990s but clearly the bits about the hacker character negated that notion. I chose the book because I like medical mysteries and it mostly satisfied that requirement.

Was The Blood Betrayal worth the listening time?

I liked being read to rather than being "acted to." Too many readers try to effect a different voice for different characters and I especially hate it when men try to modulate their voices when portraying a female character. Peter Jacobson was down to earth and very easy to listen to with no errors in inflection and he used the same voicing throughout the book which I really appreciated. I do enjoy a good reader who is also a good actor but in general most readers are not such great actors.

An Okay book storytelling could have been better.

I enjoyed the scientific aspect of the problem solving. However the story was quite fantastic. The recording if Jackson's voice might produce better even audio with more compression.
Jacobson amuses the listener with his German accent.
The worm is a good character also.

I did enjoy listening to this book however the narration is extremely flat. This truly is a medical mystery and I liked that. Something you don't get a chance to listen to every day.

Definitely wouldn't recommend this to anyone.

Can't say because the reader was so bad I couldn't go past Chapter 1.

Having a reader who :
1. Reads slowly, not races from one sentence to the next without pausing for breath.
2. Knows how to vary the modulation of his voice so it's not a droning monotone.
3. Can vary his voice, even a little, between characters

Did The Blood Betrayal inspire you to do anything?

Yes, not read past chapter 1.

Disappointed that we are actually charged money for such a poor performance.

Must not jump ahead and stay involved to the very end. The wrap up ending is Great

Didn't finish this one

I tried to listen to this book a couple of times, but it did not strike my fancy. Finally I caved in only an hour and a half before finishing and decided to use that time listening to a better book.
What I did not like in the book: Shallow characters with no real development, shabby science, and the cheap tricks like throwing in a random religious cult, a cliche German bad guy and, of course, some attraction between the two main characters. The book felt like a amateur Dan Brown novel set in a day-time hospital show.

I do like my medical thrillers, but I expect a high dose of real science in them. I might veer back to good old classics like Cook or Crichton for my summer entertainment.

Did Peter Jacobson do a good job differentiating all the characters? How?

The performance was ok, maybe a tad flat at times. No major issues. I would not shy away from other reads by the same narrator.