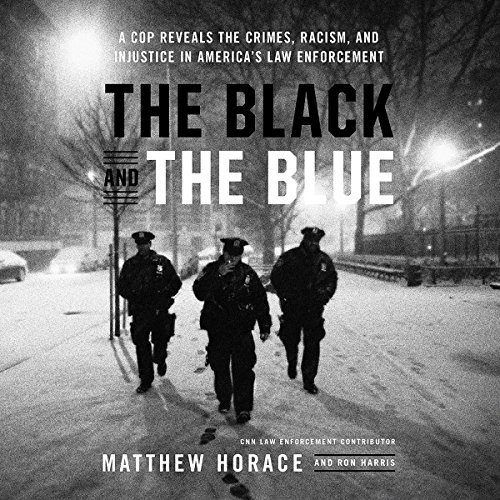 The Black and the Blue

During his 28-year career, Matthew Horace rose through the ranks from a police officer working the beat to a federal agent working criminal cases in some of the toughest communities in America to a highly decorated federal law enforcement executive managing high-profile investigations nationwide. Yet it was not until seven years into his service - when Horace found himself face down on the ground with a gun pointed at his head by a white fellow officer - that he fully understood the racism seething within America's police departments.

Through gut-wrenching reportage, on-the-ground research, and personal accounts from interviews with police and government officials around the country, Horace presents an insider's examination of archaic police tactics. He dissects some of the nation's most highly publicized police shootings and communities to explain how these systems and tactics have hurt the people they serve, revealing the mistakes that have stoked racist policing, sky-high incarceration rates, and an epidemic of violence.

"Horace's authority as an experienced officer, as well as his obvious integrity and courage, provides the book with a gravitas." (The Washington Post)

"The Black and the Blue is an affirmation of the critical need for criminal justice reform, all the more urgent because itcomes from an insider who respects his profession yet is willing to reveal its flaws." (USA Today)

"The heated debates surrounding the relationship between police and African Americans have tended to overlook one crucial part of the story: people who belong to both communities. Matthew Horace is a keen observer of the racial dynamics of policing, the often shameful history that contextualizes it and the implications for our current circumstances. A great deal has been said on this subject but very little of it [is as] perceptive and profound as The Black and the Blue." (Jelani Cobb, The New Yorker)

"The hidden dysfunctions in American policing are laid bare in this searching exposé.... Horace and coauthor Harris write sympathetically of the dilemmas of policing, but are uncompromising in their indictment of abuses. Horace's street cred and hard-won insights make this one of the best treatments yet of police misconduct." (Publishers Weekly, starred review)

"Horace has done an excellent job of weaving together his personal experiences as a law enforcement officer [and] the experiences of African Americans with the police.... This book should be read by police officers and used in criminal justice courses." (Elsie L. Scott, PhD, Director of the Ronald W. Walters Leadership and Public Policy Center, Howard University)

What listeners say about The Black and the Blue

Not for the faint of heart!

Powerful! Painfully honest! I was intrigued to read this book when I saw it recommended in the Sheriff Departments quarterly newsletter in Boston. This book gives a well researched documentation of what is happening in America today by a Cop! A black cop! A man who has dedicated his life to protecting us all; black and white. He has regrets, and has learned from his mistakes. I imagine that he is well respected in his field, but clearly is pained by the truth and reality of what was and is historical institutional racism today. He’s trying to make a difference. This book definitely is making a difference. If he does nothing else, this is his legacy. I stopped reading around chapter 11 because it’s so painful and I needed a break. I found the author, Matthew Horace on LinkedIn and wrote
Him telling how I felt. He wrote back encouraging me to push forward and after a couple of weeks, I did just that. Glad I did Horace! Thank you for educating me and giving me another lens through which to see good and decent police officers.

Changes your perception of law enforcement

What I learned listening to this book: we didn't get even half the facts about Ferguson MO from the media; systematic and potentially deadly targeting of Black people (especially Black men) by law enforcement is still a thing in America; if you stop at cursing at individual racist cops you will never reach an understanding of the people who make the policies that enable them.

Hard-hitting, well-narrated by the author. Sometimes I had to turn it off and think because what Horace is saying is difficult to process.

If you really want to know some important truths about being Black in American (even being a Black Cop in America), then this book is for you.

After listening to Matthew Horace's interview on Karen Hunter show SiriusXM Urban View Ch126, I quickly put this on my audible list. Boy did it not disappoint! while listening along I felt like this should be placed in new recruit handbook in all police departments nationally. Being able to understand how the police department works for everyone in it and all the nuances in it is very enlightening. For those 19-21 yr old first adult job rookies in the force can definitely use this to help mold a new culture and civilians should listen to help break down the barriers and together a newer level of trust can begin to move. But it takes work and effort on both sides to do so.

A responsible summation of law enforcement’s harsh and complex truths

This book was thoughtfully written. It provides a well rounded perspective on injustices, corruption, and challenges faced within law enforcement. It aims to offer truth and resolution. I would recommend this book to anyone.

Must read for 2018. If people have information about policing in America, then real conversation and change can happen.

I found Mr. Horace and Mr. Harris' insight, interviews and analysis of the collected information to be insightful. The honest view of how policing adversely affects the black communities from a former cop was refreshing. To not stand behind the "thin blue line" and ignore or makes excuses for bad policing made me listen to the entire book. Also, highlighting that bad social policies along with bad policing play a role regarding crime in black communities & the country speaks truth to power. I definitely will recommend this audiobook to those who want a honest review on police & the black community.

Every American needs to read this book in order learn why centuries of negative policing policies and mandates must change.

this is a wonderful and enlightening book. it shows both sides of the issues, of policing in America, without having a hidden agenda. the agenda is stated clearly and to the point.

An excellent book, opened my eyes to things I thought I knew, very informative.

This book is extremely well written and informative. Its eye opening and truly shocking at times. There is hope for a broken system, but the institutional racism that exists within the police and other instituitions means there is still a long way to go.

Really interesting book. Quite gruesome and shocking at times but if those are the facts then better to know than be unaware. Very good to hear the point of view of a black police officer. Recommend.
Performance was good though at times it was difficult to follow whose ideas he was stating, his or someone he interviewed (but that could just be my problem).