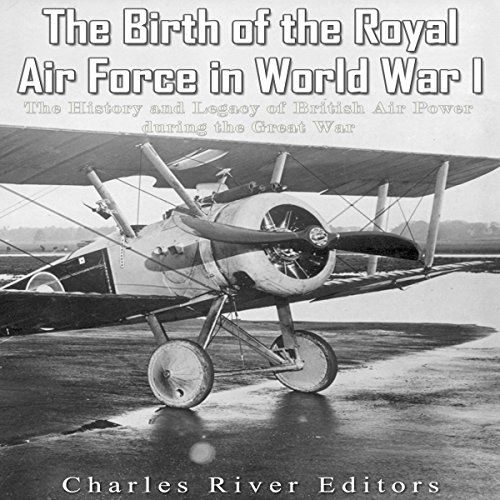 The Birth of the Royal Air Force in World War I

The History and Legacy of British Air Power During the Great War
By: Charles River Editors
Narrated by: Colin Fluxman
Length: 1 hr and 28 mins
Categories: History, 20th Century
4 out of 5 stars 4.0 (1 rating)

The Birth of the Royal Air Force in World War I

One of the most important breakthroughs in military technology associated with World War I, and certainly the one that continues to capture the public imagination, was the use of airplanes, which were a virtual novelty a decade before. While the war quickly ground to a halt in its first few months, the skies above the Western Front became increasingly busy. The great powers had already been acquiring aircraft for potential uses, but given that aerial warfare had never been a major component of any conflict, it's understandable that few on either side had any idea what the planes were capable of doing. Furthermore, at the start of the war, all sides' aircraft were ill-equipped for combat mostly because the idea that planes might somehow fight was still a novel one, and the adaptations had not yet been developed that would allow the aerial battles later in the war.

As a result, aircraft were used almost entirely for reconnaissance early on, allowing generals to gain unprecedented levels of information about enemy movements. Some armies, such as the French, saw air intelligence as a strategic matter, with aircraft capable mainly of identifying enemy forces before battle and contributing to advanced preparations. The Germans, on the other hand, believed that aircraft could provide tactical information once battle had commenced. Pilots such as Oswald Boelcke, Germany's first great aerial officer, would fly over enemy positions in two-seat aircraft with a spotter in the back, identifying Allied positions and using colored lights to direct the fire of artillery on the ground.

Of course, spotting took on great importance because of the growing range and power of artillery. Much of the fire from the great guns was aimed indirectly since the gunners could not see their targets and thus relied on intelligence from others to direct them. Maps of enemy-held territory were often woefully inadequate to start with, and with the need to know where moving enemy formations were positioned, the business gained an added complexity, but aircraft could cut through this by providing up-to-date intelligence on enemy positions and sending it back to the gun batteries which were lobbing shells over their own front lines.

The Royal Air Force (RAF), Britain's legendary air arm, was born in the skies above the First World War. The British had previously used balloons for spotting and reconnaissance for decades, and in the years leading up to the war, planes started seeing military use. They mostly provided reconnaissance, though experiments were made in using them offensively. That changed during World War I, as the skies above the Western Front became the crucible in which the preceding fragments of aerial warfare were smelted in the white hot heat of war.

The Birth of the Royal Air Force in World War I during the Great War examines the creation and evolution of the RAF over the course of World War I.