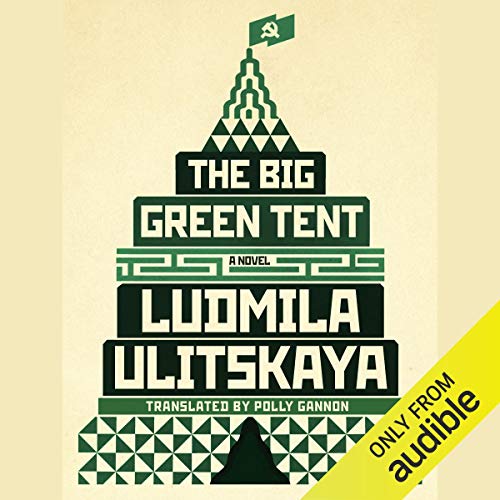 The Big Green Tent epitomizes what we think of when we imagine the classic Russian novel.

With epic breadth and intimate detail, Ludmila Ulitskaya's remarkable work tells the story of three school friends who meet in Moscow in the 1950s and go on to embody the heroism, folly, compromise, and hope of the Soviet dissident experience. These three boys - an orphaned poet; a gifted, fragile pianist; and a budding photographer with a talent for collecting secrets - struggle to reach adulthood in a society where their heroes have been censored and exiled. Rich with love stories, intrigue, and a cast of dissenters and spies, The Big Green Tent offers a panoramic survey of life after Stalin and a dramatic investigation into the prospects for individual integrity in a society defined by the KGB. Each of the central characters seeks to transcend an oppressive regime through art, a love of Russian literature, and activism. And each of them ends up face-to-face with a secret police that is highly skilled at fomenting paranoia, division, and self-betrayal. A man and his wife both become collaborators without the other knowing; an artist is chased into the woods, where he remains in hiding for four years; a researcher is forced to deem a patient insane, damning him to torture in a psychiatric ward. Ludmila Ulitskaya's novel belongs to the tradition of Dostoevsky, Tolstoy, and Pasternak: It is a work consumed with politics, love, and belief - and a revelation of life in dark times.

What listeners say about The Big Green Tent

Fascinating and intricate story line. Some of the single stories are a bit confusing to follow, but overall brings a good and realistic portraiture of society and individual characters, their feelings and emotions.

A fascinating collection of inter-related stories rather than a conventional novel, the book offers a fascinating study of dissident life in Russia in the decades after Stalin's death.

This was a wonderful, thought provoking book and beautifully read. Not only was it an enthralling story covering a secret world frim behind the iron curtain, but it also demonstrated that the writer had a genuine knowledge and understanding of science and the arts. As a musician, I was intrigued by her many references to several great composers and musicians. I loved this novel and would recommend it to anyone. It is a modern classic; a masterpiece of the highest rank and has whetted my appetite for more of her books. I am also desperate to become acquainted with more contemporary Russian literature. Fantastic!

The writing is nice but there's no story, it's a bit like a soap opera, there's characters who come and go, things happen to them but you struggle to know why you are reading it.