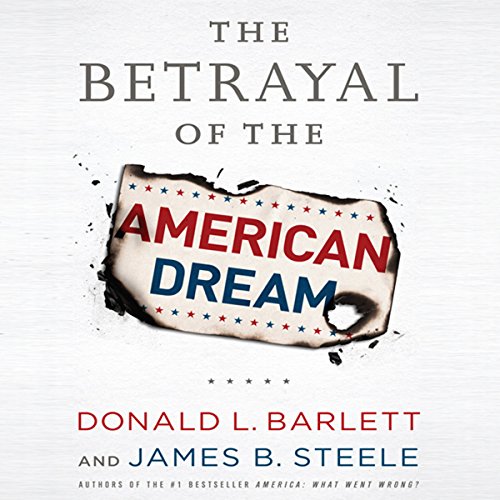 The Betrayal of the American Dream

By: Donald L. Barlett,James B. Steele
Narrated by: Wes Talbot
Try for $0.00

America’s unique prosperity is based on its creation of a middle class. In the 20th century, that middle class provided the workforce, the educated skills, and the demand that gave life to the world’s greatest consumer economy. It was innovative and dynamic; it eclipsed old imperial systems and colonial archetypes. It gave rise to a dream: that if you worked hard and followed the rules you would prosper in America, and your children would enjoy a better life than yours. The American dream was the lure to gifted immigrants and the birthright opportunity for every American citizen. It is as important a part of the history of the country as the passing of the Bill of Rights, the outcome of the battle of Gettysburg, or the space program.

Incredibly, however, for more than 30 years, government and big business in America have conspired to roll back the American dream. What was once accessible to a wide swath of the population is increasingly open only to a privileged few. The story of how the American middle class has been systematically impoverished and its prospects thwarted in favor of a new ruling elite is at the heart of this extraordinarily timely and revealing audiobook, whose devastating findings from two of the finest investigative reporters in the country will leave you astonished and angry.

What listeners say about The Betrayal of the American Dream

Good in generalities, exhausting in specifics

Although the topic of "American Dream betrayal" is ubiquitous, the authors present an organized, coherent approach to the topic. Overall, I found the book to be quite informative. However, as it went on, it devolved into incredibly boring specifics. For example, a detailed discussion of Chinese vs. Japanese trade policies and the varying effects on middle class America. Then, I got lost in details and eventually lost interest. The info in this book would make a good term paper, tho.

An extensively researched account of the calculated destruction of the American middle class and the resultant threat to our democracy. From an increasingly regressive tax code to policies that reward offshoring jobs to the increasing connectedness between the rich and their allies and politicians, it is all detailed here.

This book could have been better if the authors' arguments had been supported by broad truths rather than narrow, one-sided anticdotes.

Would you ever listen to anything by Donald L. Barlett and James B. Steele again?

What character would you cut from The Betrayal of the American Dream?

There were no characters