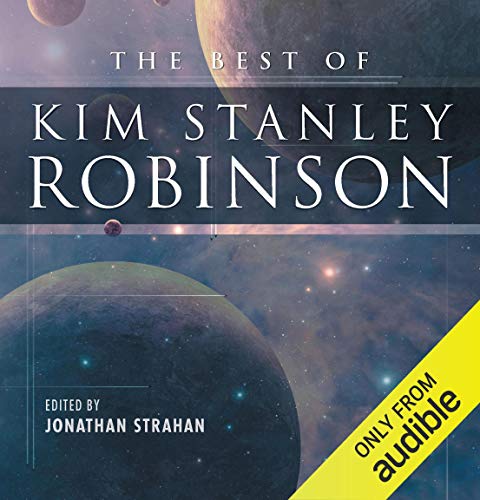 The Best of Kim Stanley Robinson

By: Kim Stanley Robinson
Narrated by: David Marantz
Try for $0.00

Adventurers, scientists, artists, workers, and visionaries - these are the men and women you will encounter in the short fiction of Kim Stanley Robinson. In settings ranging from the sunken ruins of Venice to the upper reaches of the Himalayas to the terraformed surface of Mars itself, and through themes of environmental sustainability, social justice, personal responsibility, sports, adventure, and fun, Robinson's protagonists explore a world which stands in sharp contrast to many of the traditional locales and mores of science fiction, presenting instead a world in which Utopia rests within our grasp.

What listeners say about The Best of Kim Stanley Robinson

Each one of these little stories has some theme or reverberation from one of KSR's longer works, and like those longer works, contain a lot of food for thought and a depth that means you can listen again and again and find something different each time.

I bought this just for the "Escape from Kathmandu" portion, and it is wonderful to hear it read by such a skillful narrator. The full book of four stories is KSR's funniest work, and ought to be an Audible book all on its own. However, all the stories are such little gems, and read with such feeling for the work that now I can't decide which one I like the best.

This narrator is my favorite of those KSR books I have listened to so far. I wish that Audible would get him to re-do the Climate in the Capital series, which is such a timely work, and would be well worth doing with a narrator who does justice to the emotional feel and depth of the work.

This is a book of short stories that are only marginally science fiction and might well impress those who do not like hard science fiction. For example, the first story is a pretty fair man-and-the-sea story which is only science fiction because it is set after the 40 days rains of the 2040's that drowned Venice. Otherwise, it could well be set in the 19th century.

What could Kim Stanley Robinson have done to make this a more enjoyable book for you?

I expected the author's "best" to be science fiction stories, not fiction with one or two paragraphs of sci-fi. Oh, and it would be nice for the plots to actually make some sense.

Not badly written if you don't really care for science fiction or the existence of a worthwhile plot.

This is a very enjoyable and interesting group of stories. Many of them have stayed with me long after I read them.
The characters and situations seem so close to home somehow. Not since reading Ray Bradbury have I come across an author that makes me feel that way.
I also like the fact that most stories are based on a scientific idea or premise. I don't mean that they are hard science fiction. They are more like What If? stories. Some are long and full blown. Some are vignettes. But I found all of them to be interesting and enjoyable.

The narration, by David Marantz, is also outstanding. He reads them in kind of an All American Everyman style if you know what I mean. That's another reason they remind me of Ray Bradbury so much.

Listen to the audio sample and see if you don't feel the same way.

So Not The Best of KSR

What disappointed you about The Best of Kim Stanley Robinson?

I like Robinson's stuff, but this book feels like fragments of ideas that never quite took off pressed into service as a short story collection. There's a couple gems in here, sure, that present a coherent story and actually qualify as science fiction. But a lot of the rest of them read like warm-up pieces and abandoned ideas.

Has The Best of Kim Stanley Robinson turned you off from other books in this genre?

Have you listened to any of David Marantz’s other performances before? How does this one compare?

The performance is fine. The problems are entirely with the source material