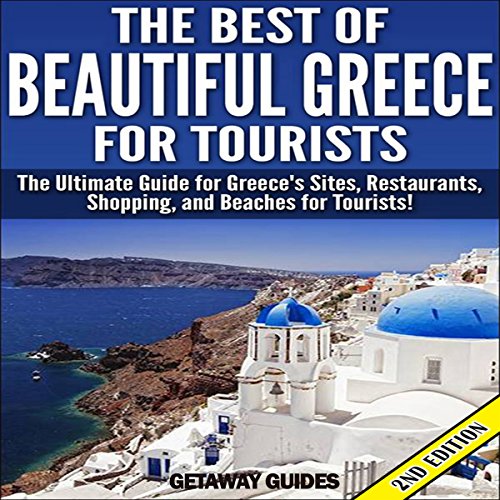 The Best of Beautiful Greece for Tourists

By: Getaway Guides
Narrated by: Millian Quinteros
Try for $0.00

The Best Of Beautiful Greece for Tourists: The Ultimate Guide for Greece & Sites, Restaurants, Shopping, and Beaches for Tourists!

Greece has always had a charm that enchanted the world since the ancient times. The birthplace of Greek mythology, ancient Greek civilization, and Greek philosophy, society and culture, this country has greatly influenced both the ancient and the modern world.

This country is also one of the most popular tourist destinations in the world. It has numerous ruins and archaeological sites, which gave modern societies a glimpse of how complex and advanced Ancient Greek society really was. These were proof that they had far more superior technologies and way of living than most parts of the world during the ancient times. Some of these sites are believed to be where Greek myths came to life. Tourists and academics alike flock to this country to study and marvel at these ancient sites.

Another attraction in Greece is the food experience. Traditional Greek cuisine is world-renowned for its exotic, exciting, and interesting array of food flavors, tastes, and textures.

From salads and dips to main courses and desserts, the Greek gastronomic experience is an adventure all its own.

Because of its location in the Mediterranean, Greece is also host to some of the world & most wonderful beaches. Greece is truly blessed with pristine waters and fine beaches, the best that nature can give.

What listeners say about The Best of Beautiful Greece for Tourists