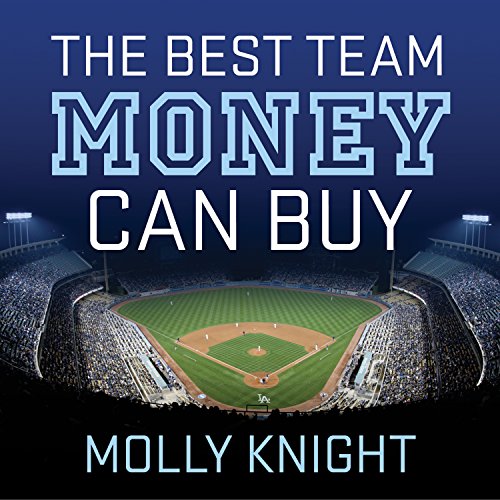 The Best Team Money Can Buy

By: Molly Knight
Narrated by: Hillary Huber
Try for $0.00

In 2012 the Los Angeles Dodgers were bought out of bankruptcy in the most expensive sale in sports history. Los Angeles icon Magic Johnson and his partners hoped to put together a team worthy of Hollywood. By most accounts they have succeeded, if not always in the way they might have imagined.

In The Best Team Money Can Buy, Molly Knight tells the story of the Dodgers' 2013 and 2014 seasons. She shares a behind-the-scenes account of the astonishing sale of the Dodgers, revealing why the team was not overpriced as well as what the Dodgers actually knew in advance about rookie phenom and Cuban defector Yasiel Puig. We learn how close manager Don Mattingly was to losing his job during the 2013 season - and how the team turned around the season in the most remarkable 50-game stretch (42-8) of any team since World War II before losing in the NLCS. Knight also provides a rare glimpse into the infighting and mistrust that derailed the team in 2014 and resulted in ridding the roster of difficult personalities and the hiring of a new front office.

Exciting, surprising, and filled with juicy details, Molly Knight's account is a must-listen for baseball fans and anyone who wants the inside story of today's Los Angeles Dodgers.

"With acumen, Knight delivers an elegant précis of a baseball team's season, and you don't have to be a Dodgers fan to enjoy it." ( Kirkus)

What listeners say about The Best Team Money Can Buy

BOTH BOOK AND TEAM NEED TO BE BETTER

This book recounts the story of the Guggenheim Dodgers (sometimes known as the Magic Johnson Dodgers). The book will primarily be of interest to Dodger fans. It does provide some generic baseball insights but primarily relies on Dodger insights. The author focuses on the star players and the tension that such prima donnas create for the team. The author seems to have a very positive impression of manager Don Mattingly. As a longtime Dodger fan I enjoyed the book, but it doesn't compare with the classic "The Boys of Summer."

Excellent Analysis of a Once Great Franchise

If you could sum up The Best Team Money Can Buy in three words, what would they be?

The way the author traced the Dodger saga from the O'Malley era to the present day. Since I am very familiar with the players and front office personnel, I was impressed with the evident objectivity.

Honestly, I have never liked Hillary Huber that much and now I know why. Her performance with this book was outstanding and I doubt anyone else could have done a better--or even a comparable job. What I found annoying in her other readings the way she would try and imitate a male voice----totally unnecessary as she demonstrated in this book.

I already cry when I reflect on the Dodger demise since the O'Malley sale so this just reinforced my sadness.

If you love the Dodgers

Must read for all Dodger fans!

It's 2019 and I'm just reading this book for the first time but it tells the great story of how the current owners and core players started their careers with the Dodgers. Molly Knight's insight into the team with unprecedented access to the players and front office and their behind the scenes discussions makes this a fascinating read. In the past two years the Dodgers have gone to back-to-back World series and have lost them both. I would love for Molly to gather enough information to write another book and give us more insight into these years as well.

The only problem I had was with the voice of the narrator, whose voice sounded very much like a computer program such Siri or Google Assistant.

Would you listen to The Best Team Money Can Buy again? Why?

Narration was well done...very consistent with the tone of the book.

I'm a baseball and Dodger fan, so was inclined to like this. But very few books give this kind of detail without resorting to either dishing dirt or flowery adulation. The author was honest and insightful and the writing is incredibly well done.

The Los Angeles Dodgers had an exciting run during the 2013 season after spending the most money on player salaries in the history of the game. This audio book by Molly Knight recaptured that season and all the adventures the team went through. While the research and interviews were thorough, there was one issue through the book that kept repeating that kept me from giving this five stars. The topic of conversation seemed to keep going off on tangents. The best example of this occurred in the chapter on Dodgers rookie outfielder Yasieul Luigi from Cuba. The narrator jumps from talking about Puig to broadcaster Vin Scully to relief pitchers and back to Puig without any connection. That may work for causal conversation but it was confusing for an audio book. But it did come all together and overall this was a good recap of the 2013 season for the Dodgers.

Really good book. Brutal narration. It's like Siri is reading to you and trust me, it's not good.

details have all been over-reported by media, making little of this book "new information" to Dodgers fans that follow the team closely.

I became addicted to listening and was sad when it was finished. Loved getting the back story to so many moments we lived out as fans. For me, audio books about baseball are an extension of listening to baseball on radio. Faithful was my first. Listening to Vin is heaven, listening to Molly's book is close.

Must Read for any MLB Fan

Great book, a must read for any Major League Baseball Fan. I'm not a Dodgers fan but a very interesting book on what went on inside the clubhouse and the front office.