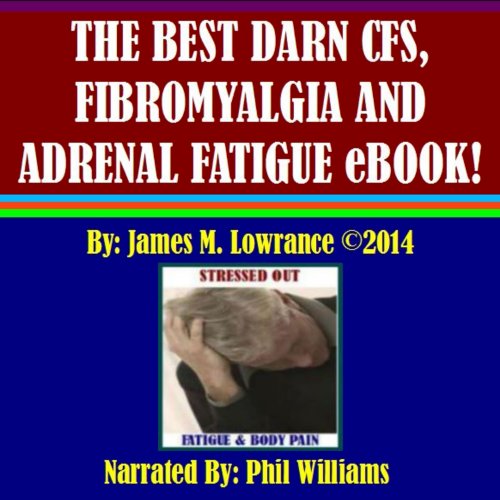 By: James M. Lowrance
Narrated by: Phil Williams
Try for $0.00

This eBook is also a section found in The Everything Adrenal Fatigue eBook!. This title is being made available, for readers wanting to read specficially about the associations between CFS, Fibromyalgia and Adrenal Fatigue.

Chronic Fatigue Syndrome (CFS) and Fibromyalgia (FMS) have 75% crossover symptom similarities, according to medical sources. These same sources, including the U.S. National Institutes of Health have found that both CFS and FMS patients present with cortisol levels (the major adrenal stress hormone) that are lower than that of the healthy population. This is what some believe to be an indicator of a mildly adrenal insufficient state called "Adrenal Fatigue". Included in this resource, is information to help readers understand the role of adrenal function, in the development of these syndromes.

Also included in the chapters, are discussions on symptoms (with added detail to those of more complication), diagnosis and treatments for these syndromes which have increased in incidence – with more people developing them with each passing year. It is a must-read for patients who are experiencing them or who suspect that they have-developed or are-developing one of these syndromes.

NOTE: This ebook is approximately 9,379 words in length. The "Best Darn" reference in the title, is not to imply that this is an extensive medical journal but rather that it contains all aspects of information on the subject that most laypersons would be seeking.

What listeners say about The Best Darn CFS, Fibromyalgia and Adrenal Fatigue eBook!