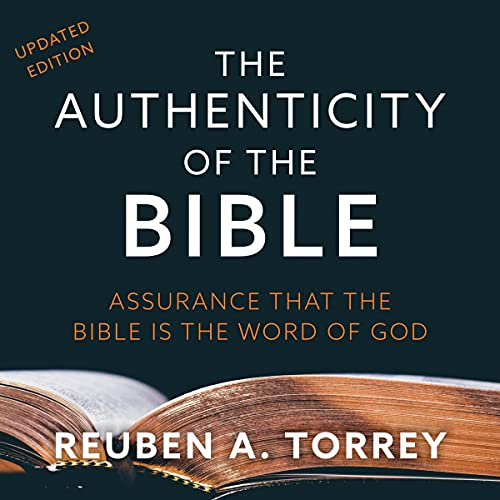 The Authenticity of the Bible

"All scripture is given by inspiration of God, and is profitable for doctrine, for reproof, for correction, for instruction in righteousness." (2 Timothy 3:16)

Is the bible the word of God? That is the most important question for humanity. If the bible is the word of God, if it is an absolutely trustworthy revelation from God himself, of himself, his purposes, and his will, of man’s duty and destiny, and of spiritual and eternal realities, then we have a starting point from which we can proceed to the conquest of the whole domain of religious truth.

This book will show you the absolute trustworthiness of the bible. Follow the word of God, and it will lead you as it has led thousands of others. It will lead you out of the uncertainty and the restlessness and the ultimate despair of unbelief and into the certitude, the joy, the victory, and the ultimate glory of an intelligent faith in the bible as the word of God, and in Jesus Christ as the son of God.

Reuben Archer Torrey traveled all over the world leading evangelistic tours, preaching to the unsaved. It is believed that more than 100,000 were saved under his preaching. Torrey married Clara Smith in 1879, with whom he had five children. In 1908, he helped start the Montrose Bible Conference in Pennsylvania, which continues today. He became dean of the Bible Institute of Los Angeles (now Biola University) in 1912, and was the pastor of the Church of the Open Door in Los Angeles from 1915 to 1924. Torrey continued speaking all over the world and holding Bible conferences. He died in Asheville, North Carolina, on October 26, 1928.

What listeners say about The Authenticity of the Bible