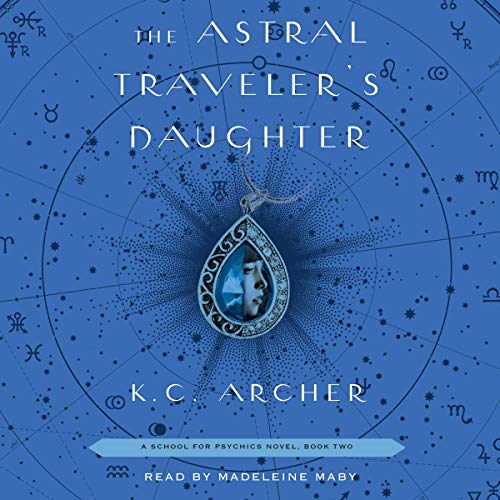 Last year, Teddy Cannon discovered she was psychic. This year, her skills will be put to the test as she investigates a secretive case that will take her far from home - and deep into the past in the thrilling follow-up to School for Psychics.

With trepidation, Teddy enters her second year at the Whitfield Institute, a facility hidden off the coast of San Francisco where students master telepathy and telekinesis, investigative techniques, and SWAT tactics for covert roles in government service. She has been obsessively tracking the movements of the Patriot Corps, a secret organization that seems to be behind a string of crimes on US soil - including the disappearance of her friend, Molly. She is not sure whom she can trust with her findings: Her friends think she is crazy, and her teachers insist she focus on her schoolwork.

Teddy tries to do what she is told. She tries to forget about her missing friend, her long-lost birth parents, her rivalry with other students, even her forbidden romance with an instructor. She learns to be a meat shield: a Secret Service operative trained to protect whatever dummy they throw her way. She learns to disarm explosive devices. She also learn to transport herself through time, as she begins to grasp astral travel (that is, if she doesn’t get lost in the time-space continuum). But Teddy has never been good at following the rules. So when an unexpected assignment leads her to the answers she’s chased for so long and reveals a clue about her own past, she takes a risk that puts everyone else she cares about in danger.

The next audiobook in the series that Kirkus Reviews called “Harry Potter with a cast of millennials”, K.C. Archer’s The Astral Traveler's Daughter is a heart-racing novel set in a world very much like our own - but there is more to this place than meets the eye.

What listeners say about The Astral Traveler's Daughter

If you are a fan of this genre, then it’s a great listen

I bought the first book on the daily sale and liked the story. The narrator was not my favorite, but I kept listening. Once I finished I saw that the sequel was due out within a week so I purchased.

There are many predictable moments and a lot of angst that felt very YA, but overall it’s a fun series. I was pleasantly surprised by the ending. I’m now looking forward to book 3 :)

A good story & I enjoyed the characters as they developed their skills. It’s always jarring to me to be gliding through a lively plot only to lurch to a cognitive stop when words get mispronounced: hearth & bow. I heard h-earth when referring to an area in front of a fireplace & now when referring to the front of a boat pronounced like a hair “bow”.. Hurts my ears!

who is KC Archer??

Who ever you are, great job!! A lot of authenticity & consciousness went into the creation of this series. Entertaining and thought provoking at the same time. The characters were written absolutely true to their character design through out the series, showing growth as appropriate in the timeline for their age and position. Refreshing! The author did a ton of research & that was also presented authentically. VERY well done! I can't believe i have to wait a whole year for the next book!!

Could be so much better!

Characters are way too sophomoric. Plot to transparent. Narrator makes an effort, but falls short

Maybe this is for young adults

but as an old adult who sometimes finds science fiction awfully dry, this is delightful. It has magic, but modern day useful magic in a world we recognize . . .no elves, dwarves, fairies, or gnomes . . .skyscrapers versus castles . and an amusing yet complicated heroine who fits the type of early twenties throughout history in every culture, ,back when we thought we knew everything.

Don't Change the Past or Maybe Just a Little

Teddy learns that her mother is an astral traveler, which means she can move her non physical self through space and time. They want Teddy to be able to do this also. Teddy makes a new friend and gets her butt kicked learning about being a secret service agent. Teddy srill breaks the rules, but Jillian gets in on some rule breaking herself. The very endind is nice, but not everyone makes it. Some die and others quit, but life must go on. I am looking forward to the next adventure.

Teddy Cannon is back in the second book in this series. Mysteries set up in the first book continue to build. Who can you trust and who wants to turn you into a weapon. Stakes rise as well as the danger level. Bombs, kidnappings, assassins, mystery drugs, and learning how to be a meat shield are just part of the story.

The book was a lot of fun and I enjoyed a lot. Reminds me of Harry Potter crossed with St Mary's Chronicles, all with exceptionally good looking twenty something's.

I recommend this book with the minor ding against the narrator. She does a fine job most of the time, but struggles a bit with male voices. The younger males all sound pretty much alike, very soft spoken and with what seems to me, a southern accent. The older males sound, well, like a woman trying to do a deep male voice. Luckily, this is a female dominated story, so it's only a bit annoying.

Start with part one. It's a fun listen. I will be looking for part 3.

Teddy actions and motivations aren’t totally unbelievable like they were in the first book. And that really helps.

I regret buying this book

I feel sorry for every character that had to interact with the main character. Teddy is selfish and self centered to the point that I was embarrassed for her "friends".I thought maybe there'd be some decent character development. but no, there wasn't. and the narration was horrific. stilted, monotone, and the inflection was plain weird, as though the narrator had never heard another person speak before! please don't waste your money.