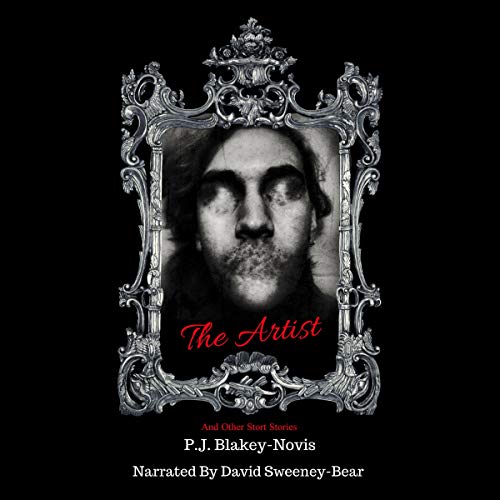 The Artist & Other Stories: Collection III

The nightmares continue in this third installment of short horrors from P.J. Blakey-Novis. The Artist and Other Stories contains a terrifying mix of serial killers, sirens, ghosts, claustrophobia, supernatural powers, and revenge guaranteed to get your heart racing and set your nerves on edge.

What listeners say about The Artist & Other Stories: Collection III

Good collection of haunting short stories. I am really hard pressed to say which one was my favorite. There were a lot that I really enjoyed and can't say that there were any that I didn't think wasn't great. The Confessional, Meredith, and Wash Away Your Sins were some of the best. They definitely were ones that deserve a second go around and will stay with you for a while after you listen.

David Sweeney-Bear did a great job with the narration. I loved his accent for the character's voices, the cadence he used, and the overall energy he put into each story.

Really liked this set of stories

I really liked this set of stories. I think The Artist was my favorite. Quite unique and surprising on how some of them ended. Worth listening or reading.

another great collection of thoughtful scary stories uniquely told by this author and narrator. I'm really enjoying these quick anthologies. Around 2 hours of listen time, you get roughly 6 scary stories that run the gambit from PNR to ghost stories to full on horror. Loved it!

I received this book in exchange for my honest review.
Although short, each story in the collection is well developed and unique. I listened to the entire collection in one sitting, and I know I will pull out this collection when I want a quick, but eerie read. Warning some of the material is fairly graphic, but those areas are brief and not over done. If you like horror stories, this is a delightfully disturbing collection that is worth the read.

This is my first introduction to the author and I was impressed. This short story collection has some great, eerie, stories. I took in the whole collection in one setting because I was hooked. I will pull out this short collection out again for Autumn and Halloween season. It's a fast, cheap, and great read! The title story, The Artist, is the first story of the collection and sets a great tone for the rest of the collection.

This is a very well written and expertly narrated collection of somewhat gruesome stories that any fan of horror will definitely enjoy.

Once again, David Sweeney-Bear's performance is brilliant and the stories are excellent, they stand out for their great quality in every way.

A collection of dark and twisted tales that keep the listener engrossed. As usual the writer and narrator work as cool combination. To bring you the very best of horror to you're eyes and ears. Highly recommend.

The Artist and Other Stories is a short story collection written by P.J. Blakey-Novis. They all have a horror focus that always develops quite early, as to not leave you waiting for the end. His writing is quite good, with vivid descriptions where characters and locations are always only described sufficiently to get you to know the type of person, and without too many superficial details. In addition there’s an excellent pacing throughout the 20 to 30 minute long stories, so the they are never dull. And I don’t know if it is intended or not, but several stories also have a sexual twist, in case that is, or is not, your thing. :)

My only caveat with this collection is that I felt most of the stories lacked a really strong ending with a twist, or just something significant that left the imagination running. They were mostly tied up somewhat satisfactory, but left you wanting juuust a bit more to really kick the stories up into that higher gear. If the author can improve that in his future stories, I will likely end up reading most he publishes, due to the strong writing!

I listened to the Audible audiobook, and there are different narrators to each story, so don’t get too caught up on one or the other, if you aren’t going through the stories on dead tree material.
Overall I give the collection 4/5 due to the excellent writing and varied stories, and I will most likely pick up more of the authors writings.

The short stories are as follows:
* The artist - A shy teenage kid with great artistic skills figure out he has a supernatural ability. He gets too confident in himself and uses his skill too much due to his raging teenage hormones, and of course ends up in trouble. Tightly written, and keeps your focus throughout. Good narrator, although he could be a bit more dynamic during tensive moments. 5/5 overall.
* The Children of the Deep - A drunkard gets in an unfortunate accident and encounters a strange family living under the sea. Good twist on the mermaid myth. I liked the story, but I felt it ended a tad too prematurely. I liked the narration. 3/5 overall, mostly due to the ending.
* The Confessional - A man sees himself angry on religion and goes on his own crusade against believers. Again a fine story, but here I also felt it lacked a really satisfactory conclusion. The narrator had a very strong accent which is usually not to my taste, but he had a quite vibrant narration which I quite enjoyed. 3/5 overall, again due to the ending.
* Merideth - An old lady lives alone in house with a small garden, and one day two people from a large company show up with interest in buying her house. She declines, and the people become very agressive in trying to evict her. But it turns out that the old lady isn’t as alone as one might think. The story had a good narrator, with somewhat of an accent. The story wasn’t very complex, but it had, for me, a surprise ending. 3/5
* Unearthed - A guy wakes up in a place where he absolutely didn’t go to sleep. Interesting premise, with a quick ending. Really nice narrator. 4/5
* Wash away your sins - Essentially a long villain monologue, by a deranged man with psychopathic tendencies. By far the most gory story of them all, with good descriptions of nasty things. But as the “story” was just one long monologue, and it had no real ending. Good narrator though. 2/5

I received this audiobook for free, in return for a review.