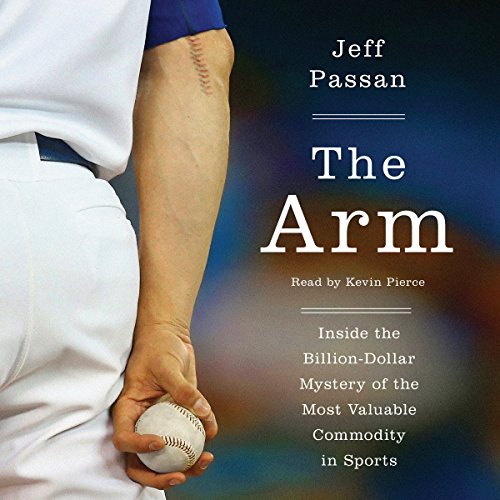 By: Jeff Passan
Narrated by: Kevin Pierce
Try for $0.00

Yahoo's lead baseball columnist offers an in-depth look at the most valuable commodity in sports - the pitching arm - and how its vulnerability to injury is hurting players and the game, from Little League to the majors.

Every year, Major League Baseball spends more than $1.5 billion on pitchers - five times more than the salary of every NFL quarterback combined. Pitchers are the game's lifeblood. Their import is exceeded only by their fragility. One tiny band of tissue in the elbow, the ulnar collateral ligament, is snapping at unprecedented rates, leaving current big league players vulnerable and the coming generation of baseball-playing children dreading the three scariest words in the sport: Tommy John surgery.

Jeff Passan traveled the world for three years to explore in depth the past, present, and future of the arm and how its evolution left baseball struggling to wrangle its Tommy John surgery epidemic. He examined what compelled the Chicago Cubs to spend $155 million on one arm. He snagged a rare interview with Sandy Koufax, whose career was cut short by injury at 30, and visited Japan to understand how another baseball-mad country treats its prized arms. And he followed two major league pitchers, Daniel Hudson and Todd Coffey, throughout their returns from Tommy John surgery. He exposes how the baseball establishment long ignored the rise in arm injuries and reveals how misplaced incentives across the sport stifle potential changes.

Injuries to the UCL start as early as Little League. Without a drastic cultural shift, baseball will continue to lose hundreds of millions of dollars annually to damaged pitchers, and another generation of children will suffer the same problems that vex current players. Informative and hard hitting, The Arm is essential listening for all who love the game, want to keep their children healthy, or relish a look into how a large, complex institution can fail so spectacularly.

"The Arm should be required reading for youth baseball coaches and parents with a child who appears to have a gift to throw a baseball. It also should be on the list for fans who want to understand why some of most expensive athletes in sports, pitchers, are such a fragile commodity." (Chicago Tribune)

"By so thoroughly presenting a serious study of the arm — or more precisely, the elbow — Passan has written an important book. For arms, if there is Tommy John surgery, maybe we now also have Jeff Passan education." (Washington Post)

"Sportswriter Passan delivers one of the more important books on baseball of the decade, a superbly researched and detailed look at the current "epidemic" of arm injuries in the sport." (Publisher's Weekly)

What listeners say about The Arm

A MUST READ for every youth baseball parent and coach

If you have a son who loves to pitch and aspires to one day to play college ball or even make it to The Show, then you must understand the precepts that Jeff Passan leads out in this study. Your son is not a commodity! Unfortunately, many coaches and leagues will treat them this way. Trust me, it's not worth it! Teach your kids to play and pitch for the love of the game...don't buy into the lie of "harder and faster now." This book is a MUST READ for every youth baseball parent and coach.

Passan has a lot to say, and like me I would guess that most baseball fans will consume this book ravenously. To me, a five-star book is among the best ever, this is not quite there but it's really close. The story covers a very wide breadth, and there are times when some of it doesn't quite hang together (I love NPB too and I'm sure the trip to Japan was fun, but not sure how much it adds) but all in all it is a compelling piece of baseball writing that also really qualifies as journalism.

Where does The Arm rank among all the audiobooks you’ve listened to so far?

I haven't listened to many, maybe just 3 or 4, so this ranks at the top as the one I've enjoyed the most so far. Very entertaining and informative listen.

What was one of the most memorable moments of The Arm?

The trials the two pitchers of rehabbing after having Tommy John Surgery. I was rooting for them the whole time.

Which character – as performed by Kevin Pierce – was your favorite?

It gave me a new perspective on what pitchers go through when dealing with the Tommy John Injuries. It made me frustrated right along with them.

Includes a lot of historical perspective about baseball in general which I liked.

Jeff Passan does a great job exploring baseball's TJ surgery epidemic. This book will be considered as revolutionary and influential as Moneyball. More & more teams will be hiring their own arm gurus. Great read & great listen. Wholeheartedly recommend.

Baseball's Version of, 'Born to Run'

Wow, what an eye opening book. It seems like we just keep fighting nature and evolution. Luckily we have intelligent and passionate researchers who actually ask the question, "Why" instead of being content with the status quo. As mentioned in the headline, Christopher McDougall's, 'Born to Run' and Passan's, 'The Arm' have much in common; albeit different parts of the body, writing style and thesis.

Where McDougall identifies a complex problem, provides historical background, collects empirical and anecdotal data, as well as provides logical solutions to counter the initial problem set, Passan captures the problem and anecdotal information, but doesn't really present a solution. Essentially he is just stating that there is a really big problem, and nobody really knows what the solution is and unfortunately, it seems, nobody really cares. He does identify the challenges with overcoming this, but one is left feeling empty with this complex problem. It seems that Major League Baseball is in its infancy in just acknowledging the problem, but for such a profit oriented organization to simply accept Tommy John surgery as the rule rather than the exception seems counter intuitive.

The narrator was great and I had no difficulty listening at 3x speed.

I did only give four stars for the story, but that is based on a comparison to, 'Born to Run'. Christopher McDougall is a better story teller and I personally found more value in 'Born to Run' than 'The Arm' as I have not been, nor will I ever be, a MLB pitcher. However, I run daily and therefore subject to those injuries and 'fixes'.

Baseball at its best

Would you listen to The Arm again? Why?

If you are interested in baseball and its current trends, specifically arm care, this is a must read. It is amazingly through in its documentation. But no it will not tell you how to prevent elbow injuries. But, you will have an amazing understanding of them

Most relevant book for this years World Series

I thought the book was great. I did feel some stories were a bit laborious and drug out, but it was a fascinating book. I would highly suggest for anyone who loves baseball or has a child that plays. I would also suggest the audio version over print unless you are a fast reader and have plenty of time. I'm not sure I could've stayed with the book as much as I enjoyed it, if I had to sit down and read through some of the long and detailed stories. Being able to listen in my car and while I walked my dog made the book more enjoyable.

the "concussion" of baseball book

excellent read, well researched and ground breaking to the sport. one of the better baseball books I've read in quite some time

Must read for anyone with kids in baseball. Specialization and travel ball are ruining the sport.