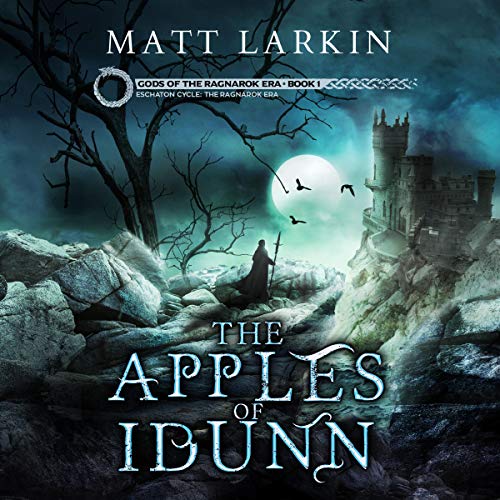 The Apples of Idunn

By: Matt Larkin
Narrated by: Ulf Bjorklund
Try for $0.00

Only a fool would venture into the freezing mists that steal the souls of men. And that’s exactly where Odin is going.

When a frost giant murders his father, Odin swears blood vengeance. Guided by his blood-brother Loki, Odin battles rival tribes and perilous ghosts. His quest leads him to a chance at immortality...but the price will be more than he can imagine.

What listeners say about The Apples of Idunn

Most myths have some some basis in fact. As Matt Larkin explains, even the Prose Edda suggested Odin was originally a man. In the first of a series, Larkin takes the same approach - while showing the beginnings of Odin's struggles to unite the 9 tribes in a dying Ice Age land. I have read several authors try to imagine the beginnings of this most fatalistic of mythologies. But Larkin's re-imaginning, set in an Ice Age bedeviled by evil in the mist that escaped from below in an earlier cataclysm, gives us a dark, gritty, fast-paced tale of the lives of the men and women who would become gods. The best re-imagining of Norse mythology since Snorri compiled them.

Creative take on philosophy and myth

Enjoyed every page of this creative epic as it begins. Looking forward to devouring the rest of the series!

A Bit Of A Detailed Series

Being not exactly up on my Norse & or Germanic Mythology, I was a bit lost on who was whom, etc. I’m hoping that when/if I choose to continue with this series, that maybe I can just try to concentrate on just the story & not the players. I recognize people like Odin, Tyr, Frigg, Freya & Loki. Overall, good book that I hope someone with a better understanding of things then I can enjoy more.

When you set out to fundamentally alter the premise of a myth cycle, you'd better succeed at providing a compelling alternative to compensate for the demythologizing of a story. Myths are different from other stories, and to attempt to convert one to another is a risky endeavor. Mary Stewart did it well with her Merlin books, while the less said about Patricia Keneally's contribution to Arthuriana, the better.
Matt Larkin does a fine job here, because, while he does tamper with the myths of Odin, he preserves that feeling of wild mystery that suffuses the Norse epics, their darkness and violence, there questions about honor and courage, and that feeling of shining a small circle of light into the darkness that is inevitably coming to overwhelm us, as Tom Shippey describes in his book about the Norse myths "Laughing Shall I Die."
Ulf Bjorklund's enthusiastic narration catches the spirit of the story admirably.
All in all, this is high quality brain candy.

This book is the story of the Nordic Gods that will be familiar to anyone who has read Norse Mythology by Neil Gaiman or many others throughout history. While the story is well trod the reader made it exciting for me. He has a British/Scandinavian style to his voice which I found perfectly suited to the book.