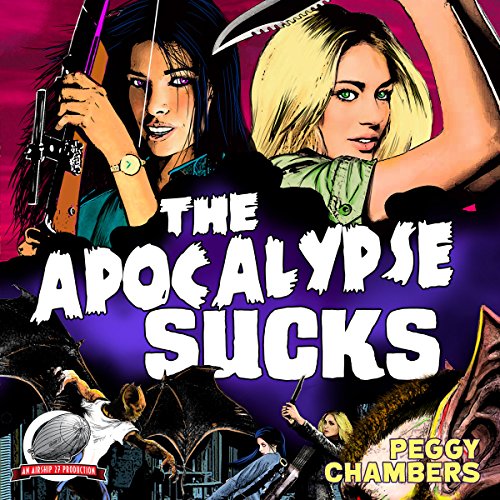 Sandra and Molly were two typical office workers enjoying their lives, which consisted primarily of going to work, shopping and looking for cute guys. Then their world came to a disastrous end brought about by a fast-acting, airborne virus that decimated the world's population. Now the girls live in the abandoned office building in which they once worked surrounded by a new and dangerous landscape; one where mutated animals roam the streets and giant birds soar through the empty skies; where frightening humanoid bat creatures have appeared to challenge humans for supremacy of the earth. What are two attractive, intelligent, single girls supposed to do now...other than merely hunt for food and try to stay alive? Well, there are still malls, albeit much less crowded, and though rare, a few cute guys still out there. So even if the apocalypse sucks, Sandra and Molly are not about to let it cramp their style. Writer Peggy Chambers offers up a truly unique, twisty adventure with two of the most likeable heroines you'll ever meet.

It is a bit hard to review this without being influenced by the bad narration. The narrator sounds like he's channeling voice recognition software and runs sentences together with little inflection.
The story goes as follows, two self professed pretty girls survive epidemic and look for cute clothes and cute men. Then there are bat people, spiders, giant mutant birds, yoga and an interminable recipe for sour dough bread. Why one needs a recipe for sour dough bread in a post apocalypse book is still undetermined. Somewhere along the line a cure is discovered and the world is mostly saved.
Overall, a pretty uneven effort that is less amusing then one would hope.
Did I mention the narration sucks?
This audiobook was provided by the author, narrator, or publisher at no cost in exchange for an unbiased review courtesy of AudiobookBlast dot com.

Ok, I liked parts of the story..snarky, some funny parts...the twists and turns...and the originality...but this narrator needs work...and it about killed the story...I am sorry, but I can not recommend!

First off, the narration makes it nearly impossible to get through. However, I love apocalypse audiobooks, so I tried to push past that. Unfortunately, despite what could have been a good story line, the audiobook seems like it was written by a guy who oogles women. Certain comments put me off to the point where I couldn't listen any longer.

This audiobook was provided by the author, narrator, or publisher at no cost in exchange for an unbiased review courtesy of Audiobook Blast.
While I enjoyed this I did have some issues with it.
There was some homage being played to Night of the Comet... Not sure if it was intentional.
The dialog was repetitive and unnecessary at times. I would have chosen a female narrator. He sort of drones on & there isn't any change in his voice when changing gender or characters. It wasn't always obvious when the story was switching from one subject/person to the next. I read that this was originally a comic book but I couldn't find it online.
I guess I wanted a little more. I don't like reading something where the writer thinks their readers aren't smart enough to draw some conclusions or remember something they were told 5 mins ago.
Again still enjoyable & has some very original ideas. Could have been funnier....

Was given free copy for an honest review

Somebody tell this narrator what a full stop is. Did not finish. Might try to get through it again.

The Apocalypse Sucks. The Book Rocks.

The story begins one year after a mutated virus kills nearly 90% of the population but there's no real doom or gloom here. Instead we follow survivors around as they struggle to find the last tubes of their signature lipstick color, and learn how to talk with their newly grown fangs. You get to see several character's point of views as they fight off bat creatures and spider infestations while coping with the life they've lost and clinging to newfound loves/friendships. It's just a lot of fun.

The only thing I didn't like was the narrator. He played it to dry which did a disservice to the text.

Overall,
If you're looking for a fun story to sink your teeth into this is it.

a different post apocalypse story. not full of gore or violence.
the author did a good job of presenting a storyline that makes you think about how hard life may be finding simple things like a bra in a post apocalypse world. and what if the killer virus didnt kill you, but turned you into a bat creature?
overall it was a good quick book . the thing that brings it down is the narrator.
text to speech would of been a better choice. he riddled the story with constant run on paragraphs and robotic speech.
this book was provided by the author, publisher and or the narrator free of charge in exchange for an unbiased review via audiobookblastdotcom

What disappointed you about The Apocalypse Sucks?

mostly the narrator it was hard to finish this book. Also i love apoclypse stories but this was mostly whiny and well just plain annoying.

some parts were okay but for the most part it hurt my brain.

Who would you have cast as narrator instead of Adam Zens?

What made the experience of listening to The Apocalypse Sucks the most enjoyable?

This is a solid zombie story with unique elements. The way the virus spreads and the way it affects people are original ideas.

Molly is a fun character with an optimistic attitude. She doesn't let something like the apocalypse keep her from enjoying shopping or dressing well.

Which character – as performed by Adam Zens – was your favorite?

Adam Zens gives Dr. Allen an interesting voice. Dr. Allen makes the best of a bad situation. He helps others and looks for a cure even while being a victim of the mutation.

This is a zombie apocalypse book. It is light and entertaining as that is its purpose. It is not deep or moving.

This is an entertaining story. It is relatively clean. Not overly gory, but plenty of action. I received this book for free in exchange for an honest review.