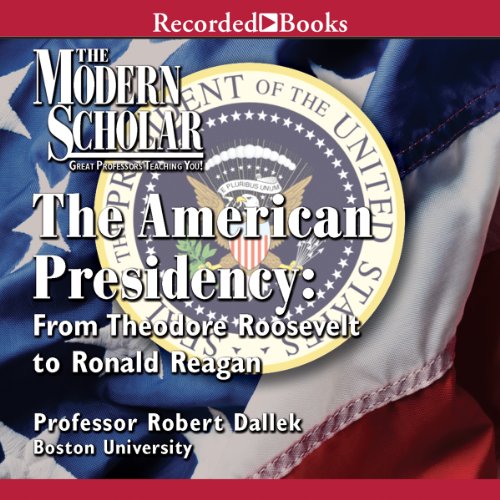 The 20th-century American presidency is something of a mystery. Some presidents performed exceptionally well in office, displaying strong leadership and winning the respect of the American people as well as the rest of the world. Others fell short of expectations and are remembered at best as marginal chief executives.

What was it that allowed some to rise to greatness while others failed? What elusive mix of character traits, circumstance, and determination combine to mold the shape of a presidential administration?

This course explores the tenures of the men who held our nation's highest office during the 20th-century. The lectures look at each president and examine his strengths and weaknesses, as well as the times in which he served. Through this analysis, listeners will develop a better understanding not only of this supreme office and how it has taken shape, but also how it has shaped America and, indeed, the modern world.

What listeners say about The American Presidency

Where does The Modern Scholar rank among all the audiobooks you’ve listened to so far?

The Modern Scholar series is usually the top grade of all non-fiction audiobooks due to the fact that the narrators do not merely read, but rather discuss topics and points. There are exceptions to this, but this program in particular was a very engaging conversation.

He delivered his lecture as a conversation and highlighted important aspects that made each presidency significant. Though he demonstrated the occasional bias (he loves FDR), he was able to produce the counter to many of his assertions, remaining as neutral as one can be in such a lecture.

Not one in particular - it was exceptional througout

Great production of the significant efforts of the executive branch from Theodore Roosevelt through Ronald Reagan.

Excellent and pithy review that captures the essence of each Presidency reviewed. Historical accuracy blended with a contextual sweep of the times.

The main events and people we should all know

I'm an admirer of Robert Dallek. He is a good storyteller, and good as a live speaker, which I do for a living too. Alas, I am too familiar with this story. I find myself mouthing all the names and events along with it. I have heard nothing surprising or really novel here. This is a solid journeyman telling of the mainstream narrative of the USA with a presidential emphasis in this century. And do not let me underestimate that; plenty of Americans seem to lack this knowledge, making them susceptible to all sorts of fabrications. This is affecting our country's functioning politically. This audiobook is the kind of thing every educated person should know. And in that, it is well done.

A bit dated (2003), this book nevertheless is a solid brief synthesis on 20th century presidents and what it takes to be a great president - adroitness, political savvy and vision.

This book didn't provide enough detail on the lives of the presidents, prior to them becoming president. Having just listened to "Outliers", I was hoping to hear more about the opportunities and personal backgrounds that led to particlar kinds of presidents

History made clear and easy!

I am a third year degree student studying US Civilisation.

This is an excellent book. The way it is presented in 'lectures' makes the whole experience much more enjoyable. I felt like I had spent 8 hours at a University conference and I thoroughly enjoyed it. It is lively, full of anecdocts that make remembering facts a lot easier and it is delivered with passion. Wish my lecturers were half as good!

Brilliant! Buy it you won't be disappointed.