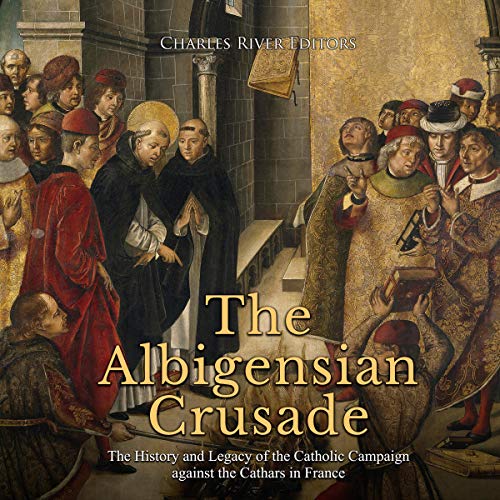 “The Roman Church...[says] that the heretics they persecute are the church of wolves. But this is absurd, for the wolves have always pursued and killed the sheep, and today, it would have to be the other way around for the sheep to be so mad as to bite, pursue, and kill the wolves, and for the wolves to be so patient as to let the sheep devour them!” (Excerpt from the alleged writings of the Cathars)

Christianity was not a state religion for its first three centuries, and it was only when Emperor Constantine the Great declared it so in the early fourth century that the Church was faced with the thorny problem of state-sanctioned violence. The first major Christian authority to justify the use of arms in defense of Church and State was Augustine, Bishop of Hippo, who wrote in the fifth century, “They who have waged war in obedience to the divine command or in conformity with his laws, have represented in their persons the public justice or the wisdom of government, and in this capacity have put to death wicked men; such persons have by no means violated the commandment, ‘Thou shalt not kill.’”

After the fall of the Western Roman Empire in the fifth century, when Western Europe was governed by a Germanic warrior-caste, the theory of a just and virtuous war took root. The Roman Church enhanced its authority by sanctifying oaths taken for just military purposes, and Bishop Anselm of Lucca (d. 1086) was the first to suggest that military action for the cause of religion could remit sin.

At the Council of Clermont in July 1095, Pope Urban II canonized religious war by urging Western Europe's nobility to take up arms in defense of the Byzantine Empire against the Muslims, thus launching the Crusades. Religious military orders such as the Knights of Saint John, the Templars, and the Hospitallers arose, ostensibly founded to protect the weak and the sick and also to extend the boundaries of Christianity and the power of the Church. In Europe, the knight, originally a mounted warrior, became a consecrated soldier of Christ, dedicated to the defense of the Church by solemn vows made before an altar.

It was not long before the concept of the holy crusade was applied beyond the holy land. The conflict between the Christian states and the Muslim Moors in the Iberian Peninsula became a holy war, as did the forced settlement of Pagan Slav lands on Germany's eastern frontier. At the beginning of the 13th century, the Knights Hospitaller and the Knights of Livonia began the conquest of heathen Baltic lands, while Sweden invaded Finland.

Naturally, the question remained concerning the use of arms against other Christians. Eastern Christians did not acknowledge the Pope's supremacy, and many held that it was lawful for him to declare a crusade to bring schismatics back to the obedience of Rome. German knights fighting the Orthodox Russians at the Battle on the Ice in 1242 believed this, as did the Hungarian prosecutors of the 1235 invasion of Bosnia, which was thinly disguised as a crusade.

The Church even extended the object of crusade to believers in communion with Rome, who refused to obey lawful authority. After peasants revolted against the Prince-Archbishop of Bremen in 1204 over tithes and land rights, Pope Gregory IX was persuaded to declare them heretics and proclaim a crusade against them, and when the “heresy” of Catharism began to take root in southeastern France toward the end of the 12th century, both Church and State considered the use of force to extirpate it.

The Albigensian Crusade: The History and Legacy of the Catholic Campaign Against the Cathars in France examines the origins of Catharism, the conflicts with Catholicism, and the fighting that led to Cathars being stamped out across France.

What listeners say about The Albigensian Crusade

History like this makes me wonder why anyone would want to represent such a violent and genocidal religion such as Christianity.

Well written. Really liked it.
These Catars were the most boring people on Earth. Thank Goodness they perished.