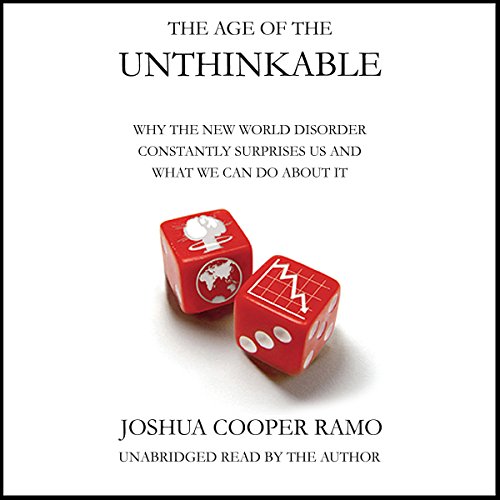 The Age of the Unthinkable

For decades, American foreign policy has been based on the seductive belief that there exists a logical relationship between power of states and the physics of change. And yet today policies designed to make us safer instead make the world more perilous. History's grandest war against terrorism creates more terrorists. Global capitalism, intended to boost the quality of life of people around the world, increases the gap between rich and poor. Decisions taken to stem a financial crisis guarantee its arrival. Environmental techniques engineered to protect species lead to their extinction. Middle East peace plans produce less peace. Our world is not becoming more stable or flatter or easier to comprehend. And what we face isn't one single shift, like the end of World War Two or the collapse of the Soviet Union, so much as a revolutionary avalanche of ceaseless change.

Now, drawing upon history, economics, complexity theory, human immunology, psychology and his own extraordinary experiences, Joshua Ramo puts forth a radical new model for looking at the world, one that embraces its inherent unpredictability--and offers our best hope for dealing with problems and disasters as they emerge.

What listeners say about The Age of the Unthinkable

I purchased this book because it was recommended by Fareed Zakaria on GPS. If you enjoy his unbiased, intelligent, long range, big picture supported by facts approach to recent events, this book this book is for you.

It only took a couple of days for me to finish this audio book, I often did not want to turn the iPod off. Ramo introduces a lot of interesting ideas that he illustrates and drives home with intriguing accounts, anecdotes and reports from various scientific, cultural, economic and political sources and points of view. Having been a reporter and well traveled, Ramo was able to draw vivid detail from experience. You could imagine putting some of the concepts to work your own life.

You have to be open Minded

Some did not give this book good ratings, however, in order to understand where the author is coming from, one must have lived overseas or at least have some insight into some of the cultures and other groups the author refers to. Reading this book as I write this review, one cant help notice that what the author talks about regarding change, is actually taking place across the world and the USA, today. If you prefer to live in an image of the world as it was portrayed to you by the Media, Corporations and narrow minded individuals, this book is not for you, this book is for those who would like to view the world from a diferent perspective.

I recently saw Ramo give a talk on China and Chinese politics, and found it very interesting to see some of the thoughts he presented there in a greater context. In this book he not only goes to some really interesting places and speaks to some fascinating people - he also "connects the dots" in a way that I found utterly fascinating - even now, more than half a decade after the book was published.

Mr. Ramo is such an eager and effective narrator, that he is almost able to make his point through his effective oral performance. Unfortunately, after listening carefully, I don't quite understand how his idea has the ability to change the shape of solutions to problems around the globe.

Key takeaways for me are:
Our country needs to be nimble and our people resilient. Cites great research into how westerners and Asians perceive the world and events. Seems too enamored of China and the force they play in adding to world instability.

An older book to be reading for current events but research citations and learning how to fail are useful lessons to take away.

This really is a must read for everyone. It should be required reading for all elected officials. It holds the keys to the paradigm shift our nation has needed for a long time.

This is one of those “wow” books. It contains real truth that speaks to you. It’s a classic, a diamond in the rough. It’s deep though, I’m going to read it in print as well.

Would you listen to The Age of the Unthinkable again? Why?

Actually, this was my second listen to The Age of the Unthinkable. There's a lot of ideas that make you re-think the way things are and how our society is approaching solutions in all the wrong ways. It's certainly one of those books that on second review, with a perspective slightly altered from the first reading begins to click the second time around.

We're in a new era where both the threats to our society and the opportunities in business are changing at an almost incomprehensible pace. Ramo explains why our old ways of looking at this change don't fit the world as we know it anymore. Mash ups of technology, the rate of information exchange, the transformation from the cold war to the age of terrorism; they all play havoc with the old ways of thinking. Ramo explains the change and takes steps to talk about solutions in making out systems of support more robust and resilient rather than simply trying to predict the next threat or change.