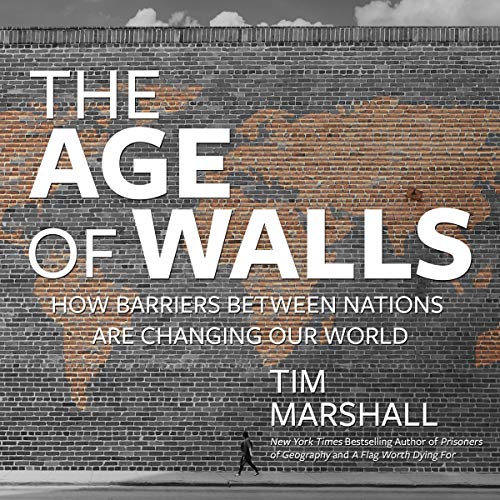 The Age of Walls

By: Tim Marshall
Narrated by: Nigel Patterson
Try for $0.00

The globe has always been a world of walls, from the Great Wall of China to Hadrian's Wall to the Berlin Wall. But a new age of isolationism and economic nationalism is upon us, visible not just in Trump's obsession with building a wall on the Mexico border or in Britain's Brexit vote but in many other places as well. China has the Great Firewall, holding back Western culture. Europe's countries are walling themselves against immigrants, terrorism, and currency issues. South Africa has heavily gated communities, and massive walls or fences separate people in the Middle East, Korea, Sudan, India, and other places around the world.

In fact, at least 65 countries, more than a third of the world's nation-states, have barriers along their borders. There are many reasons why walls go up, because we are divided in many ways: wealth, race, religion, and politics, to name a few. Understanding what is behind these divisions is essential to understanding much of what's going on in the world today.

The Age of Walls examines how walls (which Marshall calls "monuments to the failure of politics"), borders, and barriers have been shaping our political landscape for hundreds of years, and especially since 2001, and how they figure in the diplomatic relations and geopolitical events of today.

What listeners say about The Age of Walls

It was a great snapshot of Immigration Issues. This work would make a good series.

Not enough voices were sampled to accurately sum up a group's argument and this affects the contextual presentation of these arguments. Its easy to notice the gaps if you from one of these groups and even easier if your a student yourself. It is clear more primary research was needed ( voices.) This book represents an secular opinion, then quotes the bible. The scriptures were out of context, and were used to contradict political opinions. This is not unique, but it would be helpful to the reader to identify yourself or readers would assume objectivity. Was it difficult to consult a bible scholar or to back up the validity of quotes with specific religious experience? Due diligence would be listing the resource i.e. KJV, naming who was speaking, to whom was the speaker speaking, in what form and why. Furthermore, how this quote relates to an idea. If this cannot be done then it can take away from the validity of the work i.e. make me question how exhaustive and critical were the studies of the writer.

I really enjoyed this book. It took me awhile to finish it as I've been busy lately, but everytime I hoped back in it was just more and more interesting. The narrator did an excellent job and you can tell fee has knowledge in geography as well by the way he reads the content. Would recommend to anyone.