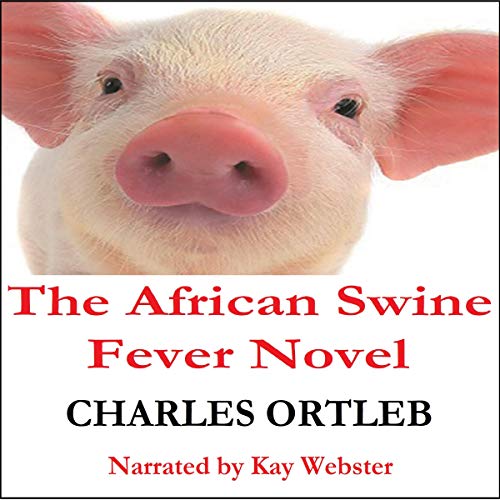 By: Charles Ortleb
Narrated by: Kay Webster
Try for $0.00

This is a very funny book about talking pigs. But it is so much more than that.

As African Swine Fever Virus, a deadly virus that infects pigs, is spreading in China and threatens to infect pigs in Western Europe - and may even reach America - the timing of this provocative novel could not be more perfect. As fears grow that the virus might be capable of infecting humans, this book raises troubling questions about the honesty and competence of public health officials.

Could the next human epidemic be lurking in pigs? Has a pig virus already quietly infected us, and is it responsible for mysterious illnesses like Chronic Fatigue Syndrome, Alzheimer's, AIDS, and autism? The African Swine Fever Novel, which appears 70 years after Animal Farm, updates the political and existential status of man and pig in a laugh-out-loud, mini-epic of a narrative that listeners everywhere will be quoting at the water cooler.

The African Swine Fever Novel has so many dynamic moving parts that it plays like it is reflecting the state of our world in real time. A contemporary allegorical fable about the overlapping breakdown of the porcine and human public health systems, Charles Ortleb's little masterpiece is full of the absurd zaniness of Catch-22 and the gritty horror of The Jungle. He has used his journalistic, critical, and comedic skills to expose our planet's newest biomedical Silent Spring.

Some will call The African Swine Fever Novel an edgy, postmodern, meta-satire, while others will deem it a jolly good tale that opens our eyes to the situation of the human-like pigs and porcine humans in our midst. In the upside-down world of book, the pigs talk and the humans oink. The pigs are more terrified of getting cockamamie diseases from humans than the humans are of getting them from pigs.

What listeners say about The African Swine Fever Novel