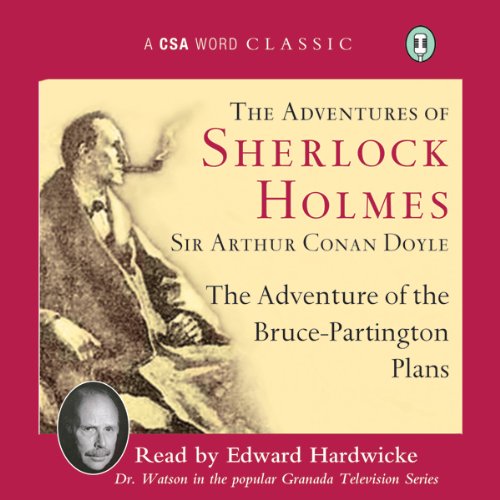 The Adventure of the Bruce-Partington Plans

By: Arthur Conan Doyle
Narrated by: Edward Hardwicke
Try for $0.00

Arthur Cadogan West, a young government clerk, is found dead by the railway tracks near Aldgate. On his body Holmes' brother Mycroft finds some secret submarine plans - three pages of which seem to be missing. These pages alone, in the wrong hands, could be used to build a Bruce-Partington submarine that would pose a threat to Britain.

Cadogan West's head has been crushed, but it looks like there has been no robbery - was the assailant after the plans? On further investigation, with no evident signs of a struggle or violence inside any of the railway coaches or track-side, our heroes realise that this is definitely no straight-forward mugging. It is clear that the young man planned to sell the plans for profit, but how was he killed, and why, exactly?

Lucky that Holmes, Watson, Mycroft and friends are on the case - rest assured they'll find their reason - and their man.

What listeners say about The Adventure of the Bruce-Partington Plans

Sherlock Holmes and Edward Hardwicke when put together are perfect! Great for all ages. I cannot get enough of this pair.