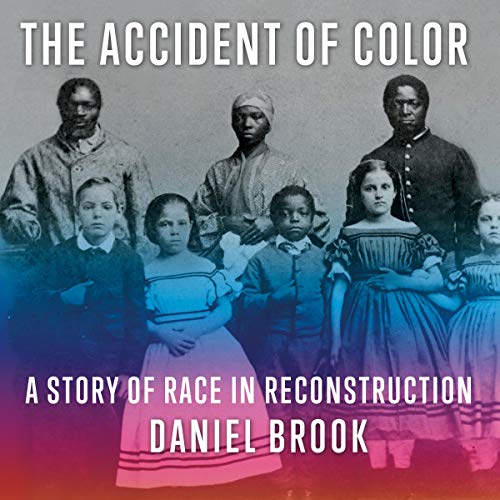 The Accident of Color

By: Daniel Brook
Narrated by: David Sadzin
Try for $0.00

In The Accident of Color, Daniel Brook journeys to 19th-century New Orleans and Charleston and introduces us to cosmopolitan residents who elude the racial categories the rest of America takes for granted. Before the Civil War, these free, openly mixed-race urbanites enjoyed some rights of citizenship and the privileges of wealth and social status. But after Emancipation, as former slaves move to assert their rights, the black-white binary that rules the rest of the nation begins to intrude. During Reconstruction, a movement arises as mixed-race elites make common cause with the formerly enslaved and allies at the fringes of whiteness in a bid to achieve political and social equality for all.

In some areas, this coalition proved remarkably successful. Activists peacefully integrated the streetcars of Charleston and New Orleans for decades and, for a time, even the New Orleans public schools and the University of South Carolina were educating students of all backgrounds side by side. Tragically, the achievements of this movement were ultimately swept away by a violent political backlash and expunged from the history books, culminating in the Jim Crow laws that would legalize segregation for a half-century and usher in the binary racial regime that rules us to this day.

What listeners say about The Accident of Color

This is a fascinating history of free men of color in Charlston, SC and New Orleans from before the Civil War through Reconstruction and into Jim Crow. My only criticism is that it jumps back and forth between Charlston and New Orleans, which can be confusing

Will listen again a few more times. Eye opener when you see how the past actions made our present situation the way it is in terms of interaction between humans of different colors/hues/complexions.

hands down the bref Ive heard in a while.

A must read! I really enjoyed it and it kept my attention all the way through.