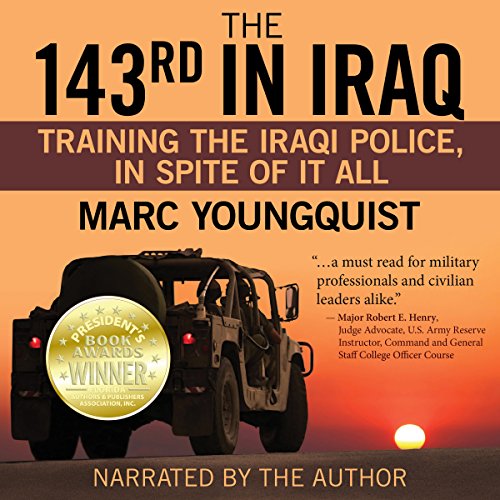 Master Sergeant Marc Youngquist has served for over 40 years in the military and law enforcement. Over those years, he has met many unsung American heroes. These are men and women who have served our country with limited resources and support while being separated from friends and loved ones for months at a time, often while living in hostile environments. When they return home, these soldiers do their best to pick up where they left off, resuming their lives, never sharing the details of their heroic acts because "it's all part of the job". Even close friends and (especially) their families never hear about the danger they were in or the lives they impacted, despite the heroism of their acts.

In The 143rd in Iraq, Youngquist provides a firsthand account of a Connecticut National Guard Military Police Company's attempt to recruit, train, and prepare an Iraqi Police Force in 2003-2004, and the many dangers they faced as a result. From training for desert conditions in the dead of winter without the appropriate gear, to driving through the night trying to find Baghdad with pieces of a map puzzle, and finally to entering war zones without an adequate supply of soldiers, weapons, or ammo, Youngquist shares how the 143rd Military Police Company did what they could, in spite of it all.

If you have ever wondered what it means when politician's use the term "boots on the ground", this military history of just one company's experiences will provide you with an eye-opening narrative, putting you in the thick of the action with these brave men and women.

Whether you're interested in military history, American heroes, the Middle East in general, or the Iraq war history specifically, or you simply enjoy a riveting story of bravery and dedication, The 143rd in Iraq is sure to please.

What listeners say about The 143rd in Iraq