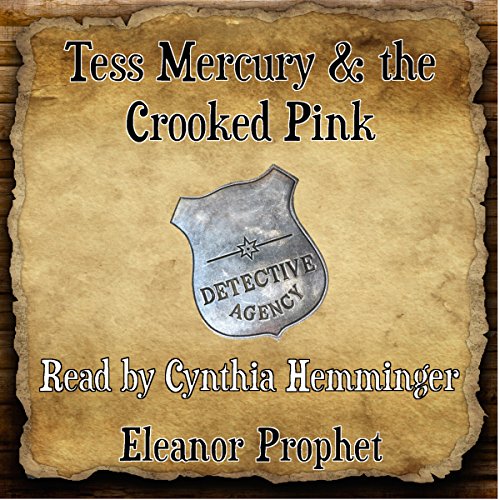 Tess Mercury and the Crooked Pink

Tess Mercury and the Crooked Pink

By: Eleanor Jane Prophet
Narrated by: Cynthia Hemminger
Free with a 30-day trial

In the years after the American Civil War, the West is wild, and the East is run by the robber barons battling each other for power and money. The range is untamed and blood-soaked, and the cities are dazzling tributes to culture and questionable scientific development. Outlaws roam free on the frontiers, and crooked lawmen and Pinkertons compete with lawless bounty hunters for the prices on their heads. Tess Mercury and her posse are the best damn bounty hunters in the West. When Tess and her posse, trick shooter "Bonny" Quimby Burton, mad scientist "Lightning" Hazel Harley and Vaughn, a former slave, are run out of town after brawling with some card players who don't take kindly to being swindled by Quimby, Tess decides a life of leisure just doesn't suit them.

They go in search of a new bounty to hunt and discover the case of Zeke "Angel" Cooper, a Pinkerton wanted for murder in Boston. The hunt for Angel leads them through the untamed frontier where Indians lie in wait, young men fighting for honor are shot dead in the streets, Che Chucho and his posse of peculiar bounty hunters are hunting them, and savvy, sophisticated Madam Esther Star courts the big bugs from D.C. at her famous brothel, the Governor's Mansion. When Tess and her posse finally run into Angel, they're tangled up in an even greater mystery involving faulty death rays, crooked lawmen, missing secretaries, murdered government agents, bribery, corrupt Congressman, clockwork horses, Tess' long lost husband, and Sterling Rush, the technology robber baron who might just be a more dangerous enemy than any of them have ever encountered.

What listeners say about Tess Mercury and the Crooked Pink

There is much new technology being created with gunpowder at it's heart. And there are bounty hunters, and Pinkerton agents. One such agent gets framed for murder, which Tess and her "posse" discover as they start to track him down for the bounty. Along the way, they encounter the same problems as today; buyable politicians and government employees, and rich manufactory owners who think that they are above the law.
But this book is fun! The characters really are, and the situations often take a comedic turn. Add in some nifty plot twists, and you have a rolicking good time travelling the breadth and length of the US.
Cynthia really gets into this performance and adds to the depth of each character, really rounding out the personality.
I was provided this audiobook at no charge by the author, publisher, or narrator in exchange for an unbiased review via AudiobookBlast dot com

Tess Mercury and her posse are the best bounty hunters of the region. Set in a parallel U.S.A after the civil war, the story has some steampunk elements, but it is essentially a western. The posse has never failed when bounty hunting. In this case the wanted man is a supposed crooked pink, but after some investigations, they are not so sure that he is guilty of what he is accused of, but merely framed by greater powers. They will be involved in a dangerous game clearly out of their league, and there will be even more surprises along the way.

I love westerns, and if they include feminine characters then I am totally sold. At first I was not sure if this was going to be a pure western or a steampunk novel, since the steampunk elements are not introduced from the beginning. I think I would have made it more evident, maybe in the descriptions or as a background information.

The main four characters are archetypes and they are not fully developed, but this did not prevent me from enjoying the story, since this is mainly an adventure book. The story is well built and it is quite entertaining, but the end felt anticlimactic. I was not sure what to think about it, and do not know yet.

About the middle of the book I started noticing tags like 'I shrugged' and ' I sighed', and from that moment onwards I was a bit bothered by them, since they appeared very often and it seemed the characters where shrugging and sighing all the time. I understand these tags were introduced to join dialogs and make the narration more fluid, but they appeared just too often, and at the end I was distracted by it.

Cynthia Hemminger did a good job with Southern accents (I have read that narrating this book was quite a challenge), however the low tone sounded a bit strange for me at first. I was not sure if Tess sounded like an old woman on purpose. I found some inconsistencies with Hazel voice and I perceived 'swallowing' noises that were a bit disturbing. In one of the first chapters birds chirping were also audible, and for a moment I was not sure if this was intended. I guess it was not, because it did not happen again. Some audio pauses felt too abrupt, but this is just being very picky.

I enjoyed this book very much, and the accent gave it a just right Southern atmosphere. I would love to read about new adventures of Tess Mercury and her posse.

Too many characters and not enough personality. This book wants to be a Joss Whedon steampunk western but fails to do that. The narrator comes off as kinda old for most of what is being said and I just never really cared about the characters.

Good old-fashioned westen mystery. Couldn't stop listening to it . Liked all of the characters.