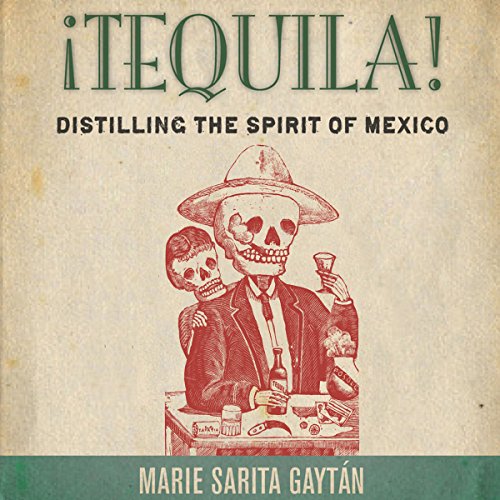 ¡Tequila!: Distilling the Spirit of Mexico

By: Marie Gaytán
Narrated by: Darren Roebuck
Try for $0.00

Italy has grappa, Russia has vodka, Jamaica has rum. Around the world, certain drinks - especially those of the intoxicating kind - are synonymous with their peoples and cultures. For Mexico, this drink is tequila. For many, tequila can conjure up scenes of body shots on Cancún bars and coolly garnished margaritas on sandy beaches. Its power is equally strong within Mexico, though there the drink is more often sipped rather than shot, enjoyed casually among friends, and used to commemorate occasions from the everyday to the sacred. Despite these competing images, tequila is universally regarded as an enduring symbol of lo mexicano.

¡Tequila! Distilling the Spirit of Mexico traces how and why tequila became and remains Mexico's national drink and symbol. Starting in Mexico's colonial era and tracing the drink's rise through the present day, Marie Sarita Gaytán reveals the formative roles played by some unlikely characters.

Like all stories about national symbols, the rise of tequila forms a complicated, unexpected, and poignant tale.

What listeners say about ¡Tequila!: Distilling the Spirit of Mexico

Just a hint of Tequila

This book has some interesting information about tequila but strayed a little too far from the topic at hand for me. It felt a little like the writer wasn't that interested in tequila but felt relating it to their other passions would help the story appeal to more people. Still in the market for a good audio book on tequila.

It would have been more appropriate under a more fitting title. It almost struck me as a research paper that a college kid was required to write about tequila as the main subject, but the writer really had more of an interest in feminism, sociology, etc. Whereas it does have very interesting history on tequila, it felt to (at bare minimum) 1/3 to 1/5 of the book was about topics other than tequila, but the writer felt like if they kept interjecting the word "tequila" periodically then they were still remaining close enough to the intended topic for it to be relevant. Honestly, after the 1/3 of the book it felt like a chore to finish the rest.

Loved the read, very in-depth analysis of the cultural and political influence of tequila. If you're a history buff, it's a must read.

The narrator did not research prior to reading. He missed pronounced all of the Spanish words with a combination of Anglo and French pronunciation. This was very of putting and distracting for the content.It is imperative in a book that covers a lot of cultural content for the narrator to be at least minimally versed and open to proper pronunciation.

The book and subject matter are great, highly insightful and accurate. The guy who is reading it mispronounces just about every Spanish word which is irritating and jarring to anyone who knows the Tequila world. Probably better to just read in print.

the last 10 to 15% was a little easier to make through. not what I expected, compared to other distilled spirits books.

Academic. Not Really a Party

If you are looking for an academic discussion of the history and sociology of tequila, then this is your book. If you’re looking for a fun book about tequila, look somewhere else.

A great social history of Taquila!

this book was fantastic for trying to understand to kill his role in Mexican culture.