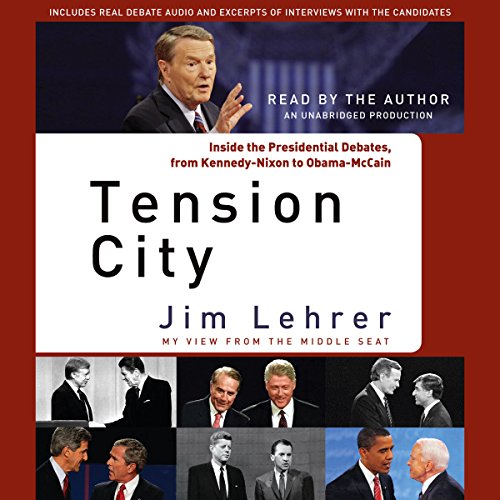 Narrated by the author, this special audiobook recording of Tension City includes exclusive interview and debate excerpts from 1960 through 2008!

"In his quiet but intense way, Jim Lehrer earns the trust of the major political players of our time," notes Barbara Walters. "He explains and exposes their hopes and dreams, their strengths and failures as they try to put their best foot forward."

From the man widely hailed as "the Dean of Moderators" comes a lively and revealing book that pulls back the curtain on more than 40 years of televised political debate in America. A veteran newsman who has presided over 11 presidential and vice-presidential debates, Jim Lehrer gives listeners a ringside seat for some of the epic political battles of our time, shedding light on all of the critical turning points and rhetorical faux pas that helped determine the outcome of America’s presidential elections—and with them the course of history. Drawing on his own experiences as "the man in the middle seat", in-depth interviews with the candidates and his fellow moderators, and transcripts of key exchanges, Lehrer isolates and illuminates what he calls the "major moments" and "killer questions" that defined the debates, from Kennedy-Nixon to Obama-McCain.

Often times, these moments involve the candidates themselves and are seared into our collective political memory. Michael Dukakis stumbles badly over a question about the death penalty. Dan Quayle compares himself to John F. Kennedy once too often. Barack Obama and John McCain barely make eye contact over the course of a 90-minute discussion. At other times, the debate moderators themselves become part of the story—and Lehrer is there to give us a backstage look at the drama. Peter Jennings suggests surprising the candidates by suspending the carefully negotiated rules minutes before the 1988 presidential debate—to the consternation of his fellow panelists. Lehrer himself weathers a firestorm of criticism over his performance as moderator of the 2000 Bush-Gore debate. And then there are the excruciating moments when audio lines go dead and TelePrompTers stay dark just seconds before going on the air live in front of a worldwide television audience of millions.

Asked to sum up his experience as a participant in high-level televised debates, President George H. W. Bush memorably likened them to an evening in "tension city". In Jim Lehrer’s absorbing insider account, we find out that truer words were never spoken.

“Unique and compelling.... Jim Lehrer at once enlightens and entertains, deepening our understanding of the modern presidency while telling a splendid story. Tension City is engaging history from a fair-minded and insightful author who has himself become part of the nation’s fabric.” (Jon Meacham, Pulitzer Prize–winning author of American Lion)
"Jim Lehrer is a national monument, and this riveting book shows how he became America’s moderator. Tension City is at once Lehrer’s behind-the-blue-curtain account of his central role in almost a dozen presidential debates and an original, brisk inner history of recent American politics, combined with important lessons on how to moderate anything—all told in Lehrer’s famously wry and authoritative voice. Each page of Lehrer’s book benefits from his unparalleled experience as a key player, and his extraordinary ability to view these fabled confrontations with the detachment, insight, humor, and ironic sense of a wonderful writer." (Michael Beschloss)

What listeners say about Tension City

Jim Leher is a jewel of a journalist.

His story of presidential debates is fascinating.

What does Jim Lehrer bring to the story that you wouldn’t experience if you just read the book?

In his voice I experienced his humility, his willingness to pass credit on to family and friends, and his joy at doing the job.

I enjoyed experiencing the debates backstage and the anecdotes related to each.

Maybe an introductory chapter which describes the overall history of debates as a vehicle to political decision making.

Perhaps make it a bit less Lehrer-Centric. The author focusses on his own first hand knowledge of the debates he has been involved in, which includes most of the biggies over the last thirty years or so. The book would perhaps be a better read if it had a broader scope of discussion.

Did Jim Lehrer do a good job differentiating all the characters? How?

Perhaps. It would depend on who writes the script, and stuff like that.

I like the Lehrer News Hour; I liked a Lehrer novel about bus drivers; however this book was kind of a dud to me.

Not Just About Presidential Debates

Jim Lehrer is one of the most important news anchors of my lifetime and hearing his anecdotes about the Presidential debates he was involved with was a window into the backstage story. This book is also partly about his philosophy of being a moderator, and about some of his experiences moderating discussions other than Presidential debates.Listening to this book is definitely the best way to go, since he includes audio clips of actual debates and interviews with participants that would just not be as rich if you read them on the page.

Would you recommend Tension City to your friends? Why or why not?

This is a light and easy listen. Enjoyable, though the research is thin and the depth is not great. Still, if you like Jim Lehrer and you're interested in political inside baseball, this is fun.

Not only is he a good reader - of course - but he is also merciless about his own shortcomings, which was humble and charming.

First things first - if you realise that this is not a definitive coverage of all debates, rather a look at those debates from the position of the moderator in some of them it is a really good read. It goes into minutia and discussion of specific items/debate formats which you some knowledge of to understand at times what Mr Lehrer is talking about. But I found myself time and again going to youtube and watching clips of the sessions spoken about. It also is wonderful from the point of view of hearing snipits from actual interviews, something which would be lacking on the page itself.

Audio format at its best

This audiobook is a perfect example of those times that the audio experience is superior to the written book. You hear actual excerpts of the debates, not just the transcription that you would see in the printed book format. The actual debate exchanges make this history much more vivid and compelling. Mr. Lehrer's interviews with the major players years after the debates adds a great deal of perspective to the historical record.

Jim Lehrer is so poignant...and genuine.

I think the audience for this book is VERY specific. His witty political banter mixes well with the jargon and inside jokes that seem to intimate the inner communication circles of elite journalists. This book is wonderful...for those who enjoy this kind of stuff. I definitely do.

I had never heard or read anything about the Presidential debates. This book sounded interesting. It is about the "behind the scences" and the things that go on that the viewing audience is not privy to. It gave me another perspective into the candidates and facilitator.