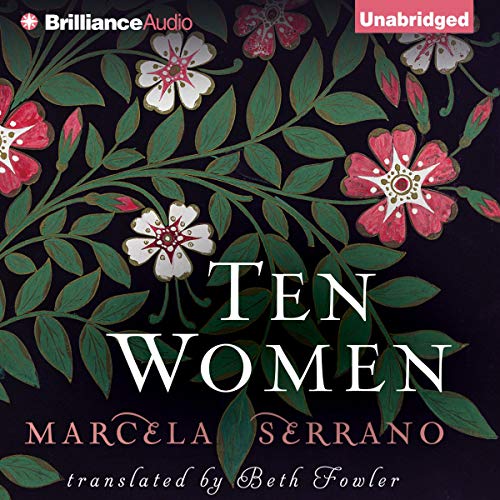 "Listening to stories gives you many lives, telling them dims loneliness." (Marcela Serrano)

Nine Chilean women from vastly different backgrounds have been brought together by their beloved therapist, Natasha, to talk about their lives and help each other heal. From a teenage computer whiz confronting her sexual identity, to a middle-aged recluse who prefers the company of her dog over that of most humans, the women don’t have much in common on the surface. And yet as they tell their stories, unlikely common threads are discovered, bonds are formed, and lives are transformed. The women represent the many cultural, racial, and social groups that modern Chile is composed of - from housekeeper to celebrity television personality - and together their stories form a pastiche that is at times achingly sad, and at other times funny and inspiring. This is an intricately woven, beautifully rendered tale of the universal bonds between women from one of Latin America’s most celebrated novelists.

What listeners say about Ten Women

I loved everything about this book. Especially the deep profound characters. Women who by another author would have been reduced to pathetic victims, are given nobility in their personal stories.

This isn't so much a novel as it is a series of 10 stories about 10 women, 9 of whom are under the care of one therapist in Chile. The therapist is the 10th woman. The premise is that they are all participating in some kind of group therapy where they share their past histories with each other. The stories really aren't connected but I did find most of them interesting.

Engrossing look at women in Chile

In Santiago, Chile, ten women--nine patients and their therapist--meet. Normally the women receive individual therapy, but this time the therapist, Natasha, wants them all together in a group session. They will all talk about their lives.

They're all very different women, different backgrounds, different experiences. An elderly former actress, a nineteen-year-old computer whiz, a housekeeper, a woman from a wealthy, connected family, women who have struggled to become or remain middle class. The last story we get is Natasha's own, an immigrant with a broken and traumatic past of her own.

Yet despite the differences and the great gulfs between them, there are common threads. They find commonalities and recurring themes, experiences and struggles that link them all.

And for the American reader, not the original intended audience, it's a look at women in Chile, and how their experiences are both like and unlike our own. The women are all compelling; they do not all seem likable at first, and yet with each there is something to connect with. Chile's 20th century history, which younger readers may not have encountered before, plays a central role in the lives of these women.

I of course can't directly judge the quality of the translation, the result seems very good to me, clear and understandable without sounding like American voices are speaking. The narrator is also very good.

The lives of women with an international twist

Not normally the sort of book I read but I picked it up on World Literature Day because it was written by a Chilean and focused on the lives of women, two topics that are intensely interesting to me. There is a chapter for each woman in the title, all of them survivors in one way or another. Their stories, while very personal, also contain much that any woman will recognize. They struggle to decide what to wear in the morning, how to raise their children, how to escape from bad relationships and how to accept love. Anyone who knows Chile will immediately relate to the sections dealing with particularly Chilean situations (the "disappeared") and landscapes. Anyone unfamiliar with Chile will learn a little about this far-away country, its classism, its extreme deserts, the way its political past still haunts many. The women of this book, with their darkness and chaos, overwhelmed me and filled me with wonder, much as Chile has permeated my being ever since I first arrived in 1984. Or like the sea in this wonderful passage from the book, as translated by Beth Fowler:

"I came to Chile to see whether I could tolerate it. The house on the beach at Isla Negra that Natasha's psychiatrist friend rented was an important factor in my decision to stay. Isla Negra as it was back then, before it became a Neruda fetish with tourists and buses and prints, was a solitary place. It received a very specific kind of visitor, the kind of people who found it a pleasure to wind up in the snack bar where we ate fried fish. We used to spend the weekends there and since we arrived in winter, my encounter with the Chilean sea was powerful. That sea at Isla Negra, its darkness, its chaos, its inaccessibility, penetrated my heart with an unexpected force, as did the pine forests and the immense rocks."

not a favorite (listened on Audible)

Each chapter was a different woman's story told in first person. The characters did not interact with each other at all, their only link was the therapist who didn't enter the story until chapter 11. Then her story was told by her assistant, which was confusing because she would switch from Natasha's story to her own without a clear delineation of storyline.
The Audible narrator did each character in practically the same voice. I ended up skipping ahead on several chapters because things seemed to really drag and I just couldn't take it.
I don't feel that the epilogue wrapped things up very well. There still was no interaction between the therapist and the characters ( if there was I must have missed it), and you just 'see' the other 9 women getting in the bus. It was frustrating to jot have anything solid happen between the characters. Maybe other readers have a different take on the format.

I did not know what to expect, but the stories of all these women were interesting and relatable!!!

I don't usually read this type of book, but I gave it a try. It was hard going and a little depressing for me. The stories were good and characters were very unique and believable. But it didn't do anything for me. I stuck with it to the end and was thankful when it was over.

I believe it would have been more interesting if they had different voices for each character.

Others said it better- pass on this one.

This book looks great. I listened to the first 20 minutes and it just isn’t grabbing me. I don’t care what happens next! I returned this one, something I rarely do.

Marcela Serrano is a well-known writer in Chile, but Ten Women is the first of her books to be translated into English. When Amazon recently offered free books for 8 novels in translation I gladly scooped this one up. And I felt it offered a unique view of life in post-Pinochet Chile.

Serrano told her story through a simple concept. Nine women are in therapy. Each one is at a very different place in life. They are old and young, rich and poor. But despite their differences they are all struggling with an aspect of life and have chosen to get help from their therapist, Natasha. They have come together to share their stories, and while gathered they also learn about Natasha's personal story -- told to them by her assistant. Strangely, the therapist is present and is commenting on the women, but she doesn't join them or speak to them.

I wanted to love this book. It seemed like it was meant for me. It focuses on women. It exposes the hard parts of life. It is all about life in a place that is completely foreign to me. Unfortunately though, I didn't connect with the characters. I found that this book is told in such a way that the characters feel one-dimensional, and there is a sameness to them. I barely noticed the passage from one chapter, and one woman's story, to the next. I expected this one to be emotional but didn't find that to be true. There is no warmth to the book. Unfortunately it felt more like ten unresolved short stories, or worse, like ten monologues. In the end, when I closed the book I also forgot the women.

Wake me upo when it's over

What would have made Ten Women better?

An actual story. This was basically 10 women telling their life story in turn. Each one went for far too long (over an hour) and if the stories had been true to life, or even interesting, I might have bothered finishing it. I found this book boring from the outset, and stuck with it for about 4 hours, then decided I had better things to listen to.

Something with a storyline

The narrators voices were pleasant enough.