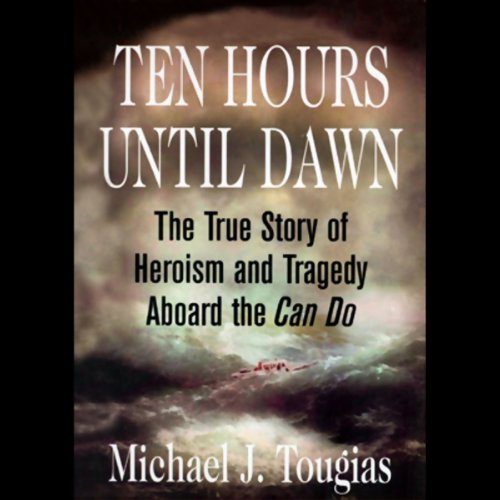 By: Michael J. Tougias
Narrated by: Joe Barrett
Try for $0.00

During the height of the blizzard of 1978, the tanker Global Hope floundered on the shoals off the Massachusetts coast. The Coast Guard dispatched a patrol boat, but was soon in as much trouble as the tanker. Then pilot boat captain Frank Quirk, hearing of the Coast Guard's troubles on his radio, decided to act. He gathered his crew of four, readied his 49-foot steel boat, the Can Do, and entered the maelstrom of the blizzard that was to become known as the "Storm of the Century".

Encountering one of the most monstrous seas ever recorded, Quirk struggled through the night to keep his boat from being driven to the depths of the sea, maintaining contact with a local ham-radio operator through his hand-held battery-powered radio. We know that the Can Do stayed afloat past three a.m. Then there was silence.

What listeners say about Ten Hours Until Dawn

Those of us who grew up during, and remember well, the winter of 1977-78 in the Midwest and Northeast, were amazed by the snow that kept on falling the last week of January and first week of February 1978. No doubt, we were all tuned to our radios and TVs waiting for the school closure announcements. This true story brings to life one of the unfortunate side effects that came with the snowfront.

The author did extensive research and interviews with many of the people who were on board the USCG ships, as well as the radio men, and the loved ones of the Can Do's crew. Much like a Ken Burns film, you hope history will turn out differently than it did.

This recording has three gems:

1) Great narration that gives character to the people portrayed;
2) The author's notes about the book's evolution; and
3) Actual recordings of some the radio transmissions of the boats and radio operators that are at the core of the story.

Excellent book. The final section with the actual radio transmissions of the Can-do and shore bases put one INTO the tragedy where other sea stories, such as "Perfect Storm" are unable to compare. There is little need for poetic license here.
Though there are sections whee the narrator didn't interpret the writing all that well, the writing is strong, informative, anad since I was IN this book, I can attest that it is painfully accurate.
Boatdog

Good Book Reminds Us of What is Important

I read the reviews about this book and some were not very nice. But I listened to it anyway and enjoyed it very much. If accents are not exact and places are not pronounced correctly, it doesn't really matter. What matters is learning about the lives of all these people and what they endured. And not forgetting this story. This story reminds me to tell people in my life everyday that I love them. That is what is important. At the end of this recording the author tells how he came to write this story, very moving.

As one who has fished around Marblehead,and Beverly harbors and grew up and lobster fished in all seasons in Nahant, the book wes especally frightening and realistic. A great listen and well done!

Great account of the great blizzard of '78, which resulted in 99 deaths. Focuses on the martime challenges that took place, expalining many of the issues that both the coast guard and civilan crafts faced. Very well written and excellent narration. Couldn't wait for my morning and evening commute to hear what happened next.

The story is so well told I could almost feel myself aboard the Can Do trying to cope with the relentless storm. It is difficult enough to navigate a truck through a blizzard. I know that. Trying to navigate a relatively small boat in storm battered seas must be worse. An excellent book for anyone who wants to know just how hard it must be to be a sailor.

Would you listen to Ten Hours Until Dawn again? Why?

Yes I would listen to this again, but there are too many side stories in this book to make it really flow.

add blunders and courage, along with bad decisions and you get tragedy and an interesting story.

80% has nothing to do with story-line

I listened through this, but I'll not get anything else by this author. Although about 20% has bearing on the story, the rest is peripherally related to the sea, and is dry hearsay with some history thrown in.

For those in Peril

If you enjoy a good yarn about the Sea, and sadly there are not enough on Audible, this will hold you spellbound. The story is simple but it is woven into a tapestry of side tales that add to the plot. The subtext is understanding the strength of those that risk their lives daily for other mariners; a breed of people that are rare and incredibly brave when Mother Nature gets very cross indeed.

I never drive without an audio book and if you want to reduce driving stress, save money on speeding fines and use the time to listen to what the writers of our world have to say, never leave home without one.