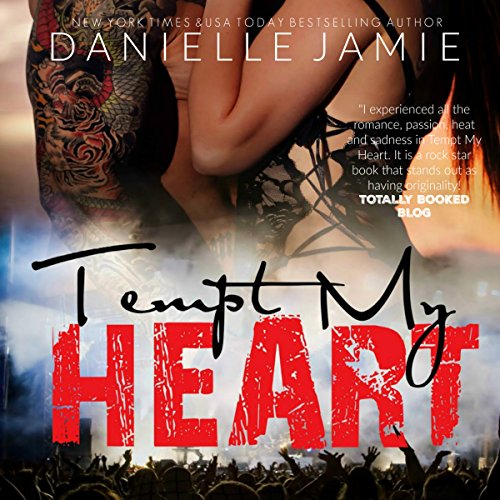 A New York Times & USA Today best-selling author brings you a standalone that will be sure to top your favorite books list for years to come.

Warning: This book will make you ugly cry so whatever you do, do not listen in public! It also contains a sexier-than-sin hot rocker who has the ability to melt your panties straight off by just a slight strum of his guitar!

Brittan McKenna’s life was perfect. After getting engaged to her high school sweetheart, her happily-ever-after seemed to be all planned out. However after 9/11 her fiancé drops out of college to enlist; Brittan’s life takes a swift turn.

During his tour she tried to stay strong and hold onto the hope that he'd soon return to her, but then the unthinkable happens and she gets the news every military spouse prays they never have to hear.

On the day Cane died, Brittan believed her heart had died along with him...or so she thought until her passion for music causes her to blaze a new trail testing fate and "tempting tomorrow".

Eight years marks the anniversary of Cane’s death when Brittan sets eyes upon Jordon, a guitarist who's shrouded in mystery and a world-class bad boy for her band's opening act, Tempting Tomorrow. Will he have that spark to set Brittan’s heart alight? After swearing off love, will Brittan allow herself to feel again after years of trying anything to numb her pain and heartache?

Does Jordon have what it takes to win her heart and make Brittan love again?

Falling for a rock star is a dangerous game, but it’s a hopeless task when you both have hidden demons.

For Jordon love does not exist...not until he meets the lovely Brittan who has the power to tame the untameable beast inside of him.

Will Brittan open her heart to love or will she sabotage the relationship before it even has a chance?

I absolutely love this story. It was well developed and meaningful. I really enjoyed the back story. It touched on a very real topic that I’m sure several women can relate to.

You can never go wrong with a Danielle Jaime book!

Danielle Jamie’s Series are my favorite. She always has the hottest book boyfriends and sex scenes. Tempt My Heart is such a bittersweet love story. This book is full of emotion. I love this book and can’t wait to read more of Danielle’s upcoming series.

This was my first audiobook. I loved listening every day in the car. The only thing that I didn’t like was the narrator who is female and tried to use a guy voice. I really wish there was a guy with a sexy voice to cover all of the guys parts. Other than that, I really enjoyed it!

So good. A must listen

This book will have you crying laughing and it sweet all wrap up in a story you can’t put down.

I absolutely loved this book! I def Ugly cried a few times and literally laughed out loud a bunch! It was heartbreaking when she lost her high school sweetheart... But there was a HEA in the cards for her... It was sad bc I loved who Kane was and I equally loved Jordan’s character... The MC was blessed to have both of them in her life... this is a must read!