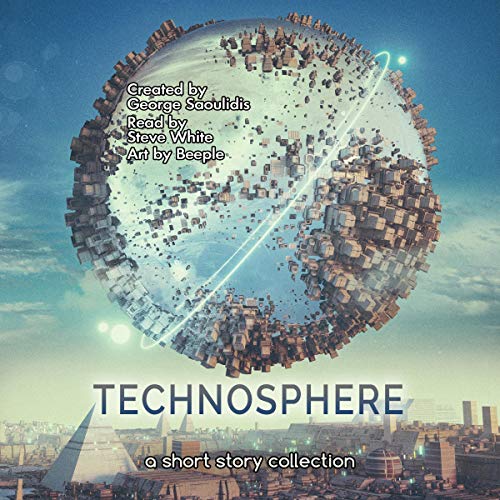 By: George Saoulidis
Narrated by: Steve White
Try for $0.00

"Spitwrite" is a term referring to a story that is written in a day. Technosphere: A Short Story Collection features a few science fiction spitwrite stories.

The book includes these stories:

This is the third book in the Spitwrite series.

What listeners say about Technosphere: A Short Story Collection

This is my first introduction to spot stories, stories spit out in one day each. Some are wonderful and I’ve come across on their own before but the collection itself has a few that I wasn’t as fond of. Some are from their own universal standalone others are part of existing universe the author has stories in and they just give you a glimpse...from talking sniper rifles, awesomely unique ballerinas, Santa fight club and Of course the most uniques custody battle
I’ve ever listened to. Overall a great collection and unique in its creation from my experience. Enjoy it. I was voluntarily provided this free review copy audiobook by the author, narrator or publisher

I was given a free review copy of this audio book, at my request, and am voluntarily leaving this unbiased review.

This is a collection of short stories, that the author says we're single day writing attempts (in the preface). And after listening to this book, I fully believe that.

With that understanding, I have been very leanient with my expectations for scope, character development and plot. And, to be honest, I was still disappointed. The characters are completely 1 dementional, the plots are all but absent, and the scope is so limited as to be "why bother?".

Truth be told, most are not short stories, half to 2/3 of the book are chapter 1 (or less) of another series that's being advertised in the book. Like mercenary goes to get coffee during a riot, and agrees to protect the shop in payment....and if you want to read more visit....

The book is also very heavily laden with sex, violence and swearing. I am opposed to none of those things, if they add something to the story or otherwise feel natural in the space. This, at times however, felt more like a 10 year old learned a new swear and had to use it as often as they could fit it in.

All this, however, would only make this book unpleasant. A bore, with some shining spots. Unfortunately, this book has fell victim to an audiobook author's worst nightmare, a truly terrible narrator.

Steve White, delivers a truly awful listening experience. While he can do a somewhat passable Russian accent, his voice is so monotone and flatly delivered it is hard to tell any other accent apart. His male and female voices all sound alike, as do his character and narrator voice. His "accents" at times, also made it hard for me to understand his language, as words were mangled.

The audio quality and editing were also a far rate below what I've come to expect. It, had a constant hiss in the background like an old cassette tape and at times single words were spliced in, in a different dialect and audio quality, to the rest of the sentence.

All in all, a neat concept of ultra short stories, that was ruined by terrible audio and not enough polishing of the stories, before including in the book.

I loved it! The narration is excellent! The author did a great job with the characters. I look forward to reading more books from this author. I was given this free review copy audiobook at my request and have voluntarily left this review.

Technosphere: A Short Story Collection (Spitwrite Series, Book 3) by George Saoulidis and narrated by Steve White is a hit or miss depending on the story. The good ones held my interest and left me wanting more, while the others just didn’t do it for me. You do get a variety of tales with George’s unique mix of Greek mythology and tech, along with some other elements. The narrator, Steve White, was also hit or miss- some voices he nailed and other voices are a no go. If you are new to George, do not start with this book as some of the stories do not do his writing justice.


*I was given a free review copy of the audiobook at my request and have voluntarily left this review. Thank you for allowing me to listen and review the book!

So I get the point behind the series, and perhaps if I were just reading one per day on a blog, I'd enjoy them more. As a collection though? It didn't really work.

There were some definite gems here, but for the most part, the stories were forgettable IMO. Again, these are off the top writing exercises, so I get they won't always be fully fleshed out, but perhaps they could have been edited and improved before packaging for distribution.

Lastly, the narration was pretty horrible. The narrator sounded like he was eating and choking on most of his words, making it very hard to follow. Audio quality wasn't the best either.

Disclaimer: "This Audiobook was given by the author, narrator, or publisher at no cost, in exchange for an unbiased honest review."

I always like to preface any reviews I give with this information.
I am a 68 year old female who has been an avid reader since I was around 10 or 11 years old.
I read primarily for pleasure.
I have a great many interests and do a lot of research for personal pleasure and knowledge as well.


Truthfully, I tried to like this collection of short stories and found a couple of them whimsical and quirky: Technosphere and The Last Stargunner to be precise.

After that the listening pleasure went downhill as the "f-bombs" and sexual content went up.

I am not a prude, but it irritates me beyond belief for a writer to continually show a lack of creativity and originality in their writing by using the "f word" repeatedly and by continually adding sexual content when it clearly does not add to the story line other than to either titillate the reader, or irritate the reader, (as it did in my case).

I listened to this audiobook for 4 hours and that was as far as I could stand it. I honestly couldn't listen to it any longer.

I truly hate to leave a negative review but I can tell you that had I had to pay for listening to this audiobook, I would have felt very cheated.

George Saoulidis, is an author I had never read/listened to before this, and with this experience I can honestly say that I will not be reading or listening to any of his work again.

Narrator Steve White is a narrator I had never listened to previously either and while I did enjoy his different character voices and accents, I simply could not enjoy the listen because of the content itself. I would be willing to listen to him again though.

I personally did not care for this audiobook at all, and so it is hard for me to recommend it.
Perhaps someone who is a 15 year old boy might be titillated (pun intended) enough to enjoy the story.