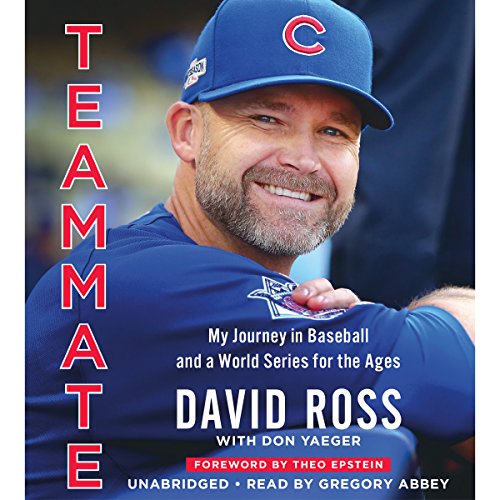 Packed with "compelling inside stories" (Chicago Tribune), Teammate is the inspiring memoir from "Grandpa Rossy", the veteran catcher who became the heart and soul of the 2016 Chicago Cubs championship team and was named manager in 2019. In 2016 the Cubs snapped a 108-year curse, winning the World Series in a history-making, seven-game series against the Cleveland Indians.

Of the many storylines to Chicago's fairytale season, one stood out: The late-career renaissance of David Ross, the 39-year-old catcher who had played back-up for 13 of his 15 pro seasons. Beyond Ross's remarkably strong play, he became the ultimate positive force in the Cubs locker room, mentoring and motivating his fellow players, some of them nearly 20 years his junior.

Thanks to Cubs Kris Bryant and Anthony Rizzo, "Grandpa Rossy" became a social media sensation. No one, however, could have predicted that Ross's home run in his final career at bat would help seal the Cubs championship.

Now, in Teammate, Ross shares the inspiring story of his life in baseball, framed by the events of that unforgettable November night.

"After sitting and having lunch with Rossy for over an hour at the ESPN studios in fall 2014, I knew he was exactly what the Cubs needed to help bring a championship to Chicago. His knowledge of hitting, pitching and the game overall was amazing. Couple that with his obvious leadership abilities, and I knew we had to have him. Well, I guess I was right! The past two years with Rossy have been the best of my career. He truly is the best teammate I have ever had!" (Anthony Rizzo, first baseman, Chicago Cubs)

What listeners say about Teammate

My family is a Cubbie fan and I enjoy listening and my hubby got the printed edition.

Great book, I loved it. One of my favorite books behind Brian song. Got some great life lessons that i will pass on to my children.

I really enjoyed the book and wanted to listen to it with my 10 year old grandson. Unfortunately there were more than a few f-bombs in the book which made it inappropriate for my grandson. There were a lot of good things in the book for a young aspiring athlete. Was it really that important to have the adult language when the book could be so good for young people?

you can't make this stuff up

A great story about the baseball life of David ross. Also is one the best story's day of game seven of the world series 2016

this was a great book. interesting perspective from a backup mlb player. it's a interesting book

Causal baseball fan and I loved it.

Very good listen and gives some behind door information on the most recent Cubs World Series win.

Best Read! For all Baseball fans!

I literally had goosebumps from the start to the finish! Any Cub fan would love this story and we know we all LOVE David Ross!
Well the book takes on his story from his beginning to the the BIG Game 7 of the World Series of a Lifetime!

5 stars all the way around

Great mix of stories, recalling events from his journal and life lessons. As a coach, there was a lot of info here that I will be sharing this fall in practices. Thank you David Ross for sharing.

that is especially enjoyable for Cubs fans. Ross' principles of how to be a good team are well Illustrated and articulated.

As a lifelong Chicago Cubs fan, it was such a thrill watching them win the World Series in 2016. In fact it was exciting watching the team play all year round. David Ross provides some of the insider details during his two years with the Chicago Cubs and the rest of his career that led him there. I felt that the narrative was a bit jumbled and could've been put together a little better, but overall it was a very enjoyable listen.