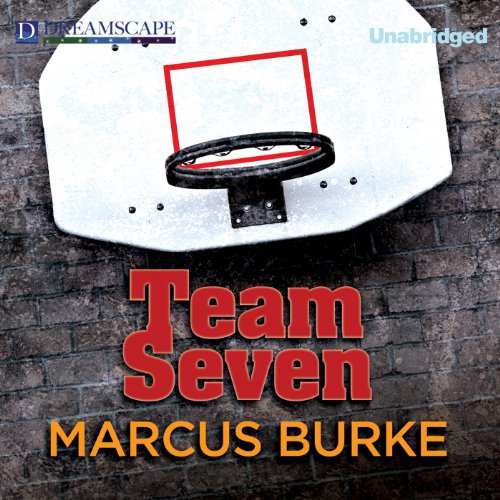 Set in the town of Milton, Team Seven follows young Andre Battel from age eight through his teenage years as he grows away from his Jamaican family, discovers genuine prowess on the basketball court, and eventually falls into a routine of dealing drugs for the local street gang, Team Seven. The story is told primarily through Andre's voice, but we also see things through the voices and points of view of his mother Ruby, a hard-working medical secretary, his older sister Nina, his mostly not-there-/usually-drunk-and-high father Eddie, a halfhearted reggae musician, and Reggie and Smoke, the kingpins of competing drug crews. What emerges is a rich portrait of a black family, a black community, and one young boy/man poised between youthful innocence and ambiguous experience.

"This is a book about people engulfed from childhood in complexities that would baffle any wisdom... Team Seven achieves a rare degree of mature and compassionate insight. It is a remarkable first novel." (Marilynne Robinson, author of Housekeeping and Gilead)
"(Team Seven) conforms to no vision other than its own, stands its own ground, and refuses to drift for even a sentence into any of the prefabricated narratives to which, in less artful hands, its characters' lives might be vulnerable. Filled all at once and irreducibly with violence and grace, despair and hope, and that most precious element, love, Team Seven will lay claim to the hearts and implicate the souls of everyone who reads it." (Paul Harding, author of Tinkers and Enon)
"Team Seven speaks directly to you from its opening burst of beautiful lines: "Pop and Uncle Elroy smoke the strangest cigarettes I've ever smelled. They smell sort of like skunk juice and gasoline." You are in the best of hands with Marcus Burke and his clear-eyed prose. Down-to-earth, comic, deadly and ultimately incredibly moving, this is a book that will last." (Peter Orner, author of Last Car Over the Sagamore Bridge)

What listeners say about Team Seven