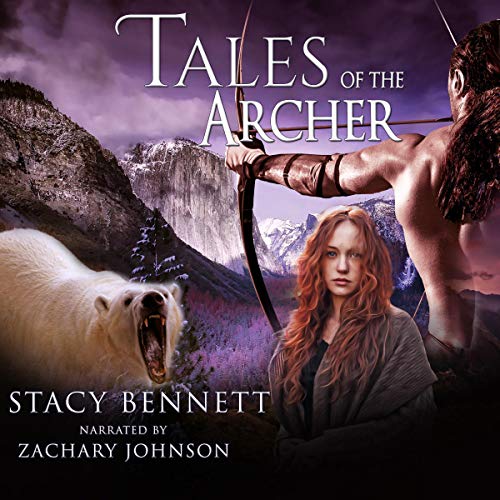 Tales of the Archer

By: Stacy Bennett
Narrated by: Zachary Johnson
Try for $0.00

Years before Archer became Captain Khoury's trusted lieutenant, before he faced down giants and murderous trees and sorcerers, Archer was just Reid Tarhill - the simple son of a trapper in love with a girl he thought beyond his reach.

Maura O'Mara is many things to young Reid Tarhill - childhood friend, partner in crime, not to mention the chieftain's daughter. One fateful Fire Night, young Reid plans a performance to gain Maura's attention. Unfortunately, his father notices her interest too, and Old Tarhill tries to thwart the courtship by throwing in with a rival clan's suitor.

The Seal Clan's heir is a far better match for a woman of Maura's status, but Gilland Fynan doesn’t know her like Reid does. While Gilland tries to impress her with his skills, Reid charms Maura with tales of love and honor.

But then sickness, a dangerous rogue bear, and a damning revelation threaten to tear them apart for good. Who knew that the fate of the entire Clan would rest on Maura's choice. It will take more than a faithful heart and a handful of stories to keep his Clan and his beloved Maura safe .

But more than anything else, Reid realizes she is the woman he'd risk everything for.

What listeners say about Tales of the Archer

A quick look at a great character!!

Tales Of The Archer by Stacy Bennett

Having met Reid in Quest Of The Dreamwaller, this story delves into his back story. I just love the character Archer, he quickly grew to one of my favs and I loved this glimpse into his past.

Having read quest of the dreamwalker first I was really looking forward to reading this book, and I wasn't disappointed. Tale of the Archer gives you a background story as to why the main character is not with his love. I am always afraid of giving away spoilers so don't write too much, just know that if you read it you will enjoy it. This book is a lot shorter that quest of the dreamwalker.

An emotional backstory for an endearing character

Archer was easily one of my favorite characters in Quest of the Dreamwalker, pretty much right from the start of the book. To get this additional glimpse into his past, and his relationship with Moira was a bittersweet joy. It’s clear they love each other very much, and we learned in the other book that his father is really what came between them. But she still waits for him, and now we can see why. He is such a wonderful character. I truly enjoyed the interwoven storytelling we got from him, and his interactions with all the members of the village. He is sweet, and kind, and honorable, and fiercely protective of those he loves, but his father is very hateful to him, and tears him down at every opportunity. The events that transpire in this glimpse into Archer’s past are heartbreaking as well as uplifting, and I can only hope that we will get to see more of this story play out in the future books of this series.