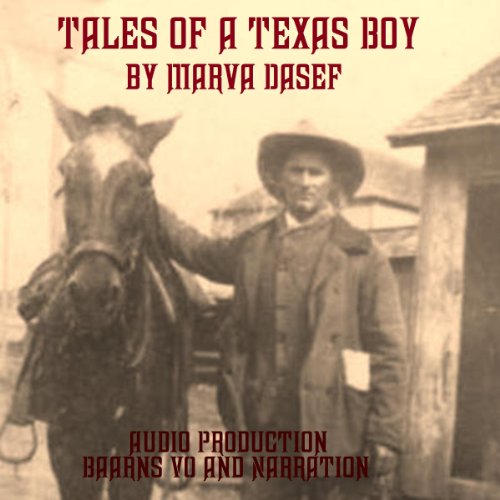 Tales of a Texas Boy

By: Marva Dasef
Narrated by: Donny Baarns
Try for $0.00

How do you handle a crazy jackass? Eddie knows. If you ask Eddie, he'll tell you pigs can fly and show you where to find real mammoth bones. Take his word for it when he tells you always to bet on the bear. These are things he learned while dreaming of becoming a cowboy in West Texas during the Depression. Through Eddie, the hero of Tales of a Texas Boy, we find that growing up is less about maturity and more about roping your dreams. Hold on tight. It's a bumpy ride. A wonderful listen for anyone who enjoys audiobooks like Little House on the Prairie or Tom Sawyer. A great bit of nostalgia for seniors, too.

What listeners say about Tales of a Texas Boy

What did you love best about Tales of a Texas Boy?

I originally read the Kindle edition of Tales of a Texas Boy a few years ago. When the audio edition was published, I downloaded it and listened to the stories again. It was a different - and very enjoyable - experience hearing Donny Baarns narrate the book.

Which character – as performed by Donny Baarns – was your favorite?

Who was the most memorable character of Tales of a Texas Boy and why?

"Tales of a Texas Boy" is a collection of twenty anecdotal stories told by a young boy, Eddie Perkins, who lived on a farm in rural Texas with his mother, father, a younger brother, and a younger sister during the 1930s when the country was deep in the Great Depression. I assume that Eddie is a fictional character, although the stories read like a true memoir.

I enjoyed the book very much. I was born in the 1940s, and I have a special fondness for the period from the 1920s through the 1950s, the period when my parents and I were growing up and coming of age. Marva Dasef has done a marvelous job of capturing what it was like for kids in the rural southwest in the 1930s. They probably never realized how tough their life was, and they actually had fun. Even though I was born a generation later, I related to the stories, especially in how siblings got along with each other.

Some of Eddie's anecdotes might have seemed mundane to another Texas kid in the era, but to me, a suburban kid in the post-WWII era, they were far from mundane. Try to imagine the thrill of hunting for (and finding) dinosaur fossils or going to town to buy livestock. Rattlesnake hunting with the local men was a thrill for Eddie, and little did he know what kind of animal he would rescue from a huge rattler's mouth one day. And handling a 1500-pound jackass? No problem, but make sure you get the instructions for taming the beast!

Some of Eddie's neighbors ("neighbor" meaning they lived no more than a few miles away in the sparsely settled west Texas landscape) were especially interesting, notably the Luck brothers, Fred and Frank. Although they were twin brothers living together, they passionately hated each other and spent most of their time trying to kill each other. Unfortunately they had a habit of taking things that didn't rightfully belong to them, including women, and this kept them in hot water!

Eddie's adventures included a remarkable encounter with a famous movie star. No spoilers, but just think "Come up and see me sometime, boys." Okay, that was probably a spoiler!

The most poignant moments of the book were Eddie's recounting his ma and pa's stories, including his pa's service in World War I.

I enjoyed "Tales of a Texas Boy" so much that I bookmarked some of my favorite stories for rereading. Most of the stories are short and would make great readings to kids today who can hardly imagine a time of grinding poverty with no modern conveniences, and yet a time when kids like themselves made do with what they had and had fun.

What made the experience of listening to Tales of a Texas Boy the most enjoyable?

The stories themselves brought back many memories of growing up on a farm. Many a laugh at the boy's antics.

The boy, Eddie, has an open, honest, and fun-loving way about him.

What does Donny Baarns bring to the story that you wouldn’t experience if you just read the book?

I loved the voice the narrator gave him. You could actually visualize the scene through the voice. Donny is a natural storyteller.

I loved each story and liked the break in between each giving a bit of enlightenment or history.

Reviews are generally favorable and I can see why. It is a pleasantly nostalgic read, short anecdotal stories of life in depression era Texas. Each is roughly 10 minutes long, relayed in a straight linear "this is how it happened" style that has no surprises and little emotion or morals to the tales. They just are what they are. It was a middle of the road kind of read - not challenging in the least. I did not like the narrator who seemed to be trying way too hard to be a good ol' Texas boy, and was simply awful with child and women's voices - especially Sister, who he voice in an ear lacerating falsetto. If you are looking for mild nostalgia, consider getting in print.

A WONDERFUL RIDE, BACK TO DEPRESSION-ERA TEXAS

What a wonderful story! It's broken down into shorter stories/essays by a young boy named Eddie, about growing up with his family in rural Texas back in the 1920's/30's. I was born in 1968 so I missed out on this challenging and tumultuous time, but this story has a very realistic feel, and I was swept away into a very different world. It must have been so harrowing and scary for the adults, not knowing what if anything the future holds... but for the kids, they found not only adversity but also adventure. They were kids, after all. They can have fun in a pile of mud :)

I loved following Eddie, his family and his adventures, it was very well written and narrated, and it reminded me of stories my dad used to tell me, about him growing up in rural Alabama in the 30's and 40's. Really enjoyed listening :)

Life on the American Frontier

This is an entertaining set of short stories surrounding an 11-year old Texan farm boy and his family. Set from 1920 – 1950, the author does a great job of capturing rural farm life and the struggle to survive droughts, the great depression, poverty and rural life in general. I loved the down-to-earth family relationships, the simple pleasures of life and the feel of the sparsely settled Texan landscape. It is refreshing, funny and tells of simpler times. The narrator did an excellent job of the accents; giving individual voices to the characters, bringing out the humor and the difficulty and joy of living on the American frontier.

Down Home Style Adds a Lot to the Stories

If you could sum up Tales of a Texas Boy in three words, what would they be?

The narrative voice is an 11-year-old boy. Donny Baarns consistently keeps in Eddie's voice and switches it up with different voices for other characters.

Have you listened to any of Donny Baarns’s other performances before? How does this one compare?

Pa's Story about Eddie's father working as a veterinarian in the army during the First World War.