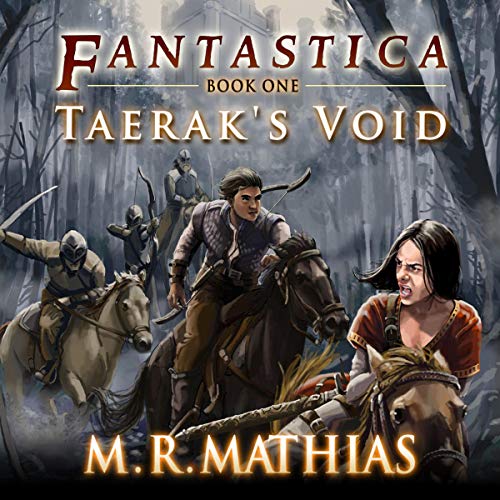 After finding a strange medallion and some maps with markings that no one in his village can understand, Braxton Bray decides to take it all to the Hall of Scholars in the kingdom's capital. But greed is everywhere. Braxton and a tough young female caravan guard named Nixy are forced to run for their lives, for someone else wants what Braxton found and is willing to go to great lengths to take it from him.

With a hefty, kingdom wide, bounty on their heads, not even the great wizards of the Sorcerious can help them. Left with nothing but each other, Braxton and Nixy have no choice but to get on a ship and go on an adventure that will take them places they would have otherwise never imagined. Elves, dwarves, giant gothicans, and trolls, treacherous forests on distant shores, love, death, terror, and magic all await anyone brave enough to go along.

What listeners say about Taerak's Void

Braxton is a fun guy to go adventuring with

It’s a fun, light-hearted sword & sorcery tale. Braxton is a goof, a very lucky goof. He’s a charming character to go on an adventure with. Braxton was never cut out for the boring life on a boring farm. As much as he will miss his best friend Davvy, he sets out on an adventure.

Ladies! These ladies are so silly and almost all of them are romantic interests, even when they have careers of their own (like being guards). Braxton is one of those charming egoists, reminding me a bit of Archer from the animated TV series. The ladies flock to him and I just had to laugh at that even as bemoaned the cliched fantasy females. Eventually, he settles down a bit with Nixy as his main squeeze. She’s got a few skills that don’t apply to the bedroom but we rarely get to see her use those skills.

The big villain, Pharark, comes at Braxton hard, not willing to give up until he gets what he wants. It’s a good thing Braxton has so many loyal companions! Dwarves, elves, and trolls all come into play. Plenty of magical danger and edged weapons! I was never bored with this book because the action kept us moving along at a quick pace.

While the ending solves some things, we still have a bit of a cliff hanger, so I look forward to Book 2 coming to audiobook. 4/5 stars.

The Narration: William L. Hahn had the perfect voice for Braxton. he captured that brave smugness perfectly. Hahn’s voice was a joy to listen to and really took this book to the next level. His female voices were believable and he had distinct voices for all the characters. There were no tech issues with the recording. 5/5 stars.

As one of the pioneers of the indie fantasy book phenomenon, M.R. Mathias has an incredible body of award winning fantasy. I discovered his writings when I came across his Vanx Malik series, which is a treat for fantasy fans. When I was given the chance to review Fantastica: Taerek's Void, I just had to say yes. After finishing, I'm glad I did, since it's a definite page turner.

Braxton is a from a small farming village, looking forward to being able to leave and see the greater world. Not needed to run the family farm, he is going to travel and see the world. When Braxton and his friend Davvy are attacked by a monster on day on the water, they make a discovery that has world shaking consequences. Being attacked by a monster, they manage to defeat it, but find themselves trapped in an underground cave. They discover a bunch of skeletons of adventurers, and Braxton finds a strange book, maps and an amulet he keeps to himself, as well as a purse of ancient gold coins, which he splits with Davvy. After escaping the cave, Braxton and Davvy see the wise man of the village, who tells Braxton he need to travel to the capital, where he can see scholars who can help him decipher the maps and possibly the book.

Leaving his old life behind, Braxton goes on towards the capital, having a few adventures along the way. Reaching the capital, he ends up seeing the scholars, one of which, a woman named Master Bee, helps him decipher where the maps need him to go, which turns out to be the island of the elves. As he heads that way, he is accosted by some highwaymen, and is saved at the last moment by a female mercenary named Nixy and Braxton's horse, who is just a badass. Joining up with Nixy, Braxton continues on the path towards the elves. However, finds himself being hunted by a bunch of mercenaries, who are after the bounty on Braxton, placed by a necromancer looking to get his hands on the amulet.

Escaping the bounty hunters, Braxton and Nixy end up on a ship headed to the elven island, and meet a bunch of dwarves on board. when they get to the island, they discover that the Dwarves are princes of the dwarves, sent to meet with the elves about disturbances on their land. what follows is a counsel between the humans, elves, dwarves and a great wizard, in which they determine an ancient evil is rising again to threaten the world, and the maps, book and amulet are all tied to it, as is an artifact left in the elves keeping that has since been lost.

Braxton is starting to find that the amulet is gifting him with magical abilities, and he has to work at Taerek's Void, the mental state that allows him to use these new found abilities. Joining with his new allies, Braxton embarks on a quest to find the lost artifact, and undertake a voyage that the fate of the world may hinge on. Can Braxton possibly defeat the forces arrayed against him? Only time will tell.

Worldbuilding is a definite strength in this book. M.R. Mathias is known for writing rich, detailed descriptions of both settings and characters, and this is definitely shown here. You get a real feel of being right in the scene. from descriptions of things as small as the sound and look of a flowing river, to something as large as a dying dragon crashing through some trees, you can definitely feel yourself drawn right in to the scenes.

The characters are definitely fun. Braxton is the everyman who has world shaking events thrust upon him, and steps up to the plate to answer. He swings between confident and naively innocent to the ways of the world. He is an engaging character who you find yourself rooting for. Nixy is a strong character, doing what she feels is right, even at the cost of her own personal gain. While she can be a strong fighter, she is also compassionate for those who fall on hard times. The secondary characters are a mixed bag, but fit well in the story. The villains are in the background, with very little open acting against the characters, with the exceptions of assassins. Its a slow tension builder, and works well with the story.

The narration is ably handled by Will Hahn. This was the first time I've heard his work, but it definitely wont be the last. A writer in his own right, Will understands the pacing of the story's narration, making sure to move the narrative portions along without monotone or other pacing issues. He has a good range of voices, both male and female, human and other. He uses a variety of tones and accents to differentiate the various characters, all to good effect. He really helps bring the story to life.

The first book in a series can always be a challenge. Will the characters resonate? Does the plot make sense? in the case of Taerek's Void, I can safely say the answer is yes to both. The story is gripping, and will appeal to a wide range of fantasy fans. I can definitely recommend it with no reservations.

I really loved the story, it moved at a nice pace and I'm looking forward to diving deeper into this new world. The narrator was fine, but it took me a chapter or so to get used to his cadence and how he presented the characters. Once over that, I enjoyed the story and look forward to listening to the next installment!

What an interesting start to the series. I have been captivated and curious as to where these groups are going and what will become of them.

This book is the first book in a series. It follows Braxton as he leaves his farm to seek adventure in the world. What he finds is that he is thrust into a world of wild adventure and deceit and having to fight for his life. He also finds many friends and love.

The book is written well and is not boring. The narrator does an outstanding job of accenting points of excitement.

This book was provided free of charge and this review was freely given.