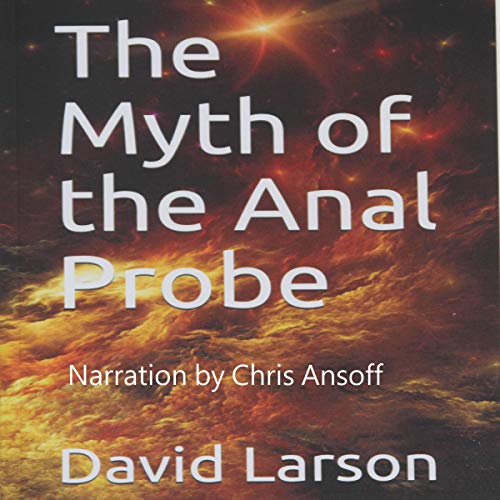 By: David Larson
Narrated by: Chris Ansoff
Try for $0.00

Mike has been abducted by aliens in this irreverent examination of the alien abduction mythos. He awakens not knowing how he got where he is. Bob, a wisecracking “alien,” greets him. Bob looks exactly like a human being. After much questioning, Mike discovers that people from Bob’s planet have been abducting humans for thousands of years. As part of that conversation, Mike learns that the reason Bob looks so much like a human being is that Earth was seeded by Bob’s planet. Due to circumstances beyond their control, the colony was reduced to two directly related individuals, who proceeded to populate the planet.

All of the resultant inbreeding led to the development of an unusual variant of Bob’s species. This variant fights with each other, kills each other, establishes countries with different languages, and engages in other sorts of pathology. The reason Bob’s people continue to visit and abduct individuals is to determine how to fix the problems that they caused by starting with only two people. In the course of the wide-ranging discussion, Mike learns that many famous individuals have been abducted or visited by the members of Bob’s race.

Mike convinces Bob to take him to their original planet. This takes quite a bit of convincing; several individuals have to be persuaded that this is a good idea. Mike does end up convincing them, however. Once on the planet, Mike’s ulterior motive becomes finding a way to stay on the planet and live in this newly revealed Eden-like world.

In order to accomplish his plan, Mike needs to develop an entirely new way of interacting with other people. He has to retrain himself; eliminating any vestiges of Earth-like aggressive and violent behaviors. Unfortunately, Mike doesn’t really understand how badly his environment has affected him.

it's not believable, idealistic.

This book shows a lack of understanding of how the world really works. I think the author should read a few history books before they start sprouting ideas that have been tried and have failed.

Should be made into a movie.

If you are a fan of Pierce Anthony, Rodeenberry or other writers of alternate societally structures and alternate human origin stories this is definitely for you.
I enjoyed the premise and how it was told I believe this would make a great movie.

Great Sci-Fi with a healthy dose of soul searching

I was grabbed from the very beginning and fell in love with Bob, one of the main characters. Mike is a completely likeable guy who is thrust into a world of wonder and beauty where there is no conflct and everyone works together for the common good of all people of Hale. He desperately wants to be a permanent part of the wonder that is Hale. Explaining the ways of Earth cause him to question why we actually do what we do to others. It is very funny but also very thought-provoking. It can also make you cringe when you think about some of the concepts Mike tries to explain--thinking wow, why are we as conflict driven as we seem to be. I found myself cheering for Mike as he struggles. Thoroughly entertaining while giving you pause. Highly recommend.

OMG. It could not be more tedious. A long screed from a liberal. A complete waste of a credit. The narrator did his best with an terrible book.

Like being in the principal’s office for 6 hours straight