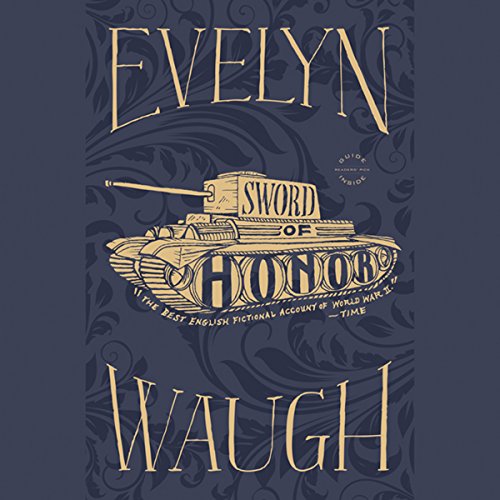 By: Evelyn Waugh
Narrated by: Simon Prebble
Try for $0.00

This trilogy about World War II, largely based on his own experiences as an army officer, is the crowning achievement of Evelyn Waugh's career. Its central character is Guy Crouchback, head of an ancient but decayed Catholic family, who at first discovers new purpose in the challenge to defend Christian values against Nazi barbarism, but then gradually finds the complexities and cruelties of war too much for him.

Though often somber, the Sword of Honour trilogy is also a brilliant comedy, peopled by the fantastic figures so familiar from Waugh's early satires. The deepest pleasures these novels afford come from observing a great satiric writer employ his gifts with extraordinary subtlety, delicacy, and human feeling, for purposes that are ultimately anything but satiric.

What listeners say about Sword of Honor

At least one chapter missing

At least one chapter - chapter one of 'Officers and Gentlemen', the trilogy's second volume - is missing. This is not an instance of an editorial decision by the makers of the audio edition, much less a later version of the text. (Waugh revised the book.) It's simply, inexplicably missing.

Wonderful performance of a novel beyond praise. Waugh's chronicle of England at war. No drama, only honesty. I felt empty when the novel came to an end, after 25 hours. I wanted it to go on...

The best novel of World War II ever

This book, even more than “Brideshead revisited” Showcases was talent for satire, realism and psychological insight. It is by turns hilarious, poignant, sad and beautiful, And at all times an historically accurate, almost eyewitness account of some of the most pivotal events in the history of the 20th century. The performance of this audiobook is, bar none, the best I have heard on audible thus far. Simon Prebles range of voices and accents is truly amazing.

Where does Sword of Honor rank among all the audiobooks you’ve listened to so far?

What other book might you compare Sword of Honor to and why?

This is to WWII what Ford Maddox Ford's Parade's End is to WWI.

Powerfully existential....not that anyone would come see it with that tag line!

I had read Brideshead Revisited some time ago and wanted another Evelyn Waugh book. This certainly hit the spot.

Adding to the enjoyment is the fact that Simon Prebble read the book very well.

Superb Epic of WWII and the Journey of a Soul

Perhaps the Finest novel of WWII, intelligently and sensitively performed, capturing the bitter irony and dark comedy and stoic tragedy of Waugh’s elegant and often surprisingly stark prose. One does not think of Waugh as a writer of military tactics or geopolitical analysis or desperate battlefield reportage —but he stands equal to The 20th century’s finest in these.

long but worth your time

Evelyn Waugh's characters are vivid and amazing. it took me a while to get into the story but I'm glad I persisted. wonderful.

the voice was great the story was endless

if it wasn't for the power of the audio I would never have finished this book it was rambling and Lewis and love too many unanswered questions and points. any likeable characters came in and out of the story with no real closure