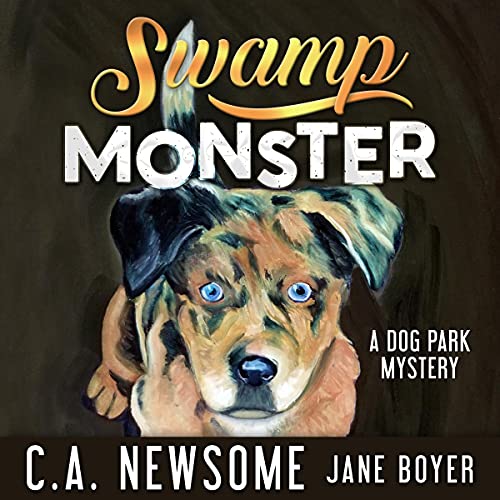 Old bones land Detective Peter Dourson up a creek without a paddle.

Human remains surface on the banks of Cincinnati’s Mill Creek, sparking a media circus. It’s a case Detective Peter Dourson shouldn’t have, with attention he doesn’t want - even before his former fiancée arrives to fan the flames.

It’s the Dog Park Gang’s fault it landed in his lap.

Starving artist Lia Anderson has her own problems. Her new puppy is on a mission to destroy everything she owns, and a ditsy new client is driving her crazy. Worse, Peter’s ex wants to rekindle their relationship.

When the bones are tied to dark rumors from 1940, past becomes present. It will take Lia and the Dog Park Gang to prevent history from repeating itself.

What listeners say about Swamp Monster

Lia Anderson's beloved dog, Honey, has died, and she adopts a new puppy--whom her police detective partner, Peter Dourson, dubs Swamp Monster, but Lia names Gypsy. It's been a long time since Honey or her mini schnauzer, Chewy, were puppies. She's forgotten how much puppies are inclined to chew everything.

Peter Dourson is hoping to wrap up a case involving the organized theft of Amazon packages off of porches, a case that will benefit the whole community, while not involving any dead bodies.

It's just too bad that some of Lia's dog park friends are part of a yacht club tour of the local river, to promote ecological protection of it, when a tree on the unstable riverbank falls, and reveals the bones of a man who died and was buried there in the 1980s. One of those friends calls Peter rather than calling 911, making Peter first on the scene. When someone follows up by calling The National Enquirer that the bones were enclosed in an outfit remarkably like Elvis, it becomes a media circus.

Peter's boss, Captain Parker, decides that with homicide tied up with a mass shooting, and the bones being a media circus, it needs someone with Peter's diplomatic skills with the public and the press to handle this particular, very hot, cold case.

Things get livelier when Peter's ex-fiancée, Susan Sweeney, shows up, hoping to both reclaim Peter, and to launch a YouTube "citizen journalist" career for herself. She's willing to fight dirty, and can't believe Lia is any serious competition.

As Peter digs into the case, he identifies the body, and starts uncovering the story of a magician who performed at children's parties, was widely liked, and disappeared for no apparent reason. There are few people left who even remember him. Interwoven with this story, we're getting flashbacks to the 1930s, and the possible roots of the magician's death in the 1980s. The search for more information about the man identified as Andrew Heenan leads to a search for his teenage housekeeper, who dropped out of sight shortly afterward. Meanwhile, Susan Sweeney is interviewing every kook with a crazy theory, the crazier the better for he YouTube hits, and dropping in largely fictional bits of gossip designed to make trouble between Peter and Lia, or alternatively to damage Lia's reputation.

Oh, and when Susan shows up at their home, Gypsy attacks Susan's temptingly dangling scarf.

We learn more about Peter, more about Lia, and their dog park friends wind up providing useful help and bits of information, some more willingly than others. I love these characters, their dogs, and the stories, and I think this latest is the best one yet.

I received a free copy of this audiobook from the author, and am reviewing it voluntarily.