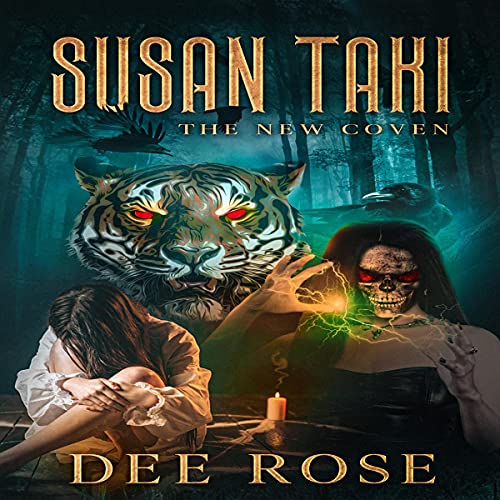 By: Dee Rose
Narrated by: Jeremy Olivier
Try for $0.00

Susan Taki awakened from a magic-induced coma in the events of The Death Brothers: A Supernatural Awakening. After helping her boyfriend, the demon hunter, Father Tom Padilla in New York, she has now returned home to San Diego. She is weighing an offer from the vampire slayer, Jericho Caine, to be his partner, while she patrols the streets as a supernatural policeman at night.

However, her old witches coven has returned with a new leader, Tatiana. They intend to make Susie stand trial for her role in the death of one of their former leaders. The punishment is death. The underworld also has an interest in the outcome of the trial as they know Susie is an ally of their enemies, the Death Brothers.

Susie, with the help of a visiting Tom Padilla, must fend off attacks from her former coven and the underworld.

What listeners say about Susan Taki: The New Coven

Susan Taki faces a new challenge after she awakens from a magic-induced coma. Not only is she contemplating working for a vampire slayer, but now her old coven has a new leader who is gunning for her! Lots of action.

This book is the ninth in the series, and I have not read or heard any of the others prior. The story was easy to follow, the author gives enough background, so the listener is not lost. The plotline is good, and it is action-packed. It held my attention with the different plot twists and actions. The dialog is a bit rough – you can only say “suckka” so many times before it gets annoying.

Olivier did a great job of narration. He gave unique voices to each character. He kept the story flowing in a steady pace and spoke clearly.

If you enjoy stories involving the supernatural, peppered with adventure and action, then you will enjoy this book.

There were a couple of instances where the editing to the audio was not on par – there were some repeated sentences. Other than that, the production and quality were good.

Jeremy Olivier narrated the book and did a decent job of keeping the story interesting and engaging however the tones of his voice become hilarious at certain points through the audiobook during lovemaking scenes or when trying to say words like sukka.

In My Opinion this is a fun story that is fast paced in a world filled with very interesting characters that will blend together very nicely with the other novels in the series by Dee Rose.

A fun, thrill-ride of a supernatural fantasy and action novel, author Dee Rose has done a fantastic job of world-building in this narrative. Admittedly, this is my first foray in The Hangman Universe, but the author’s writing and the narrator really do a great job of implementing a cinematic quality to the writing, bringing to mind shows like Buffy the Vampire Slayer, Angel, and Wynona Earp.

The vast array of characters and mythology that the author implements into this narrative is engaging to say the least. The story implements a wide array of classic and iconic paranormal elements, from vampires and witches to demons and angels. The author breathes new life into the classic theme of good vs evil, crafting a series of complex characters that both define these two sides and at times stride the line between both.

A masterful, action-fueled, and entertaining read (and listen!), author Dee Rose’s “Susan Taki: The New Coven” is a great new supernatural thriller. The author does a good job of complimenting the series that has preceded this novel while also giving newcomers a chance to really sink their teeth into the story. Great dialogue and cinematic imagery really craft a fantastic read that fans of the genre won’t be able to get enough of, so be sure to grab your copy today!

Author, Dee Rose contacted me about reviewing the audio version of Susan Taki: The New Coven. However, I don’t think I can truthfully review it without first discussing the exchange she and I had prior to my accepting it.

Simply put, I made a mistake in accepting it. I usually check to ensure a book has previous reviews before I’ll accept it. I do this because I write an honest review, which means there is a chance I might write a negative one. But I’m not usually cruel enough to knowingly write a castigating review if it’s going to be the book’s only review, with nothing to balance against it.

However, when the author emailed me to review this book, I got distracted by it being 9th in a series. I wrote her back and asked her if it stood alone, saying that if it did I would accept it, inferring that if it didn’t I would pass. But in the process I forgot to check for reviews. By the time I realized there were no others I had already said yes and received the Audible code.

All of this is relevant for two reasons. The first is that Rose said, “It is definitely a stand-alone book. There are only rare references to the previous books as Susan Taki is a newer character that I was introducing to the series. The intro sums up the smaller role she played in the previous books.” But I have to disagree STRONGLY.

The recap in the beginning does help, but it’s not enough, not nearly enough. Characters aren’t introduced. There’s no world-building. The magic system isn’t explained, such that types of magic users feel like they appear randomly. We start with witches and vampires. Then we get demons. Then angels. Somewhere in there Slayers and Death Brothers show up and I still don’t really know exactly what they are or if they differ. Are there other magic creatures that just haven’t made an appearance yet? I don’t know. So, I don’t know the limits of the world.

The book feels 100% like you’ve picked up a story in the middle. This may not be relevant to the review of the book if you’re reading it as part of the series. But it absolutely effected my ability to read and enjoy it on its own. I would not advise reading it as a stand-alone book.

Second, if I hadn’t been reading this for review, I would have DNFed it very early on and avoided writing the review at all. I would have done this regardless, but most especially since it has no other reviews to counter-balance this one.

Both the book and the narration are simply bad. The narrator, Jeremy Olivier, did OK with the parts that were just straight narration. But he took super cheesy dialogue and made it sound even more cliched and stereotypical. (“Sucka” was particularly jarring. It didn’t sound at all natural.) It was a catastrophic combination. Usually a if it’s a decent book with poor narration or a mediocre book with good narration one balances the other out. But here they just compounded each-other.

Outside of the narration the writing is an issue. Even in audio I caught a few editing mishaps, though that’s not a huge thing. There was just so much description, even in places where there shouldn’t be. People don’t talk like omniscient narrators. They don’t notice and relay details in conversation like an outside narrator creating atmosphere would. And there are several points in which characters tell stories and describe things that a speaker simply wouldn’t. Had these been narrative flashbacks, it probably would have worked, but as person speaking, no. Events jumped around such that I barely followed what was happen half the time. There’s no build-up in the plot. Susan is suicidally rash. No one has a believable emotion, they’re all just blown out of proportion. And then the ending went totally against the villain’s personality.

I did appreciate that there’s some diversity in the cast. And as far as I could understand it, I think the kernel of an idea that formed this book was interesting. But it was a big fat flop for me.

Note: I recieved and Audible code for a free copy of this book. I chose to listen and review it.

Susan Taki: The New Coven is a book that is action packed and full of intrigue. The characters are well written and developed with a slight quirky nature. The story is descriptive, fast paced and entertaining.
I received this book at my request and I am voluntarily leaving this honest unbiased review.

Just Not For Me

Overall I don’t think the issue I felt with this book was because I hadn’t read the others beforehand, although it may play a part of it. This is after all the 9th in a series.

Personally I found the story to be quite shallow. The characters lack depth and in many scenes it felt like rather than having personality, the characters acted to cliche version of “cool.”

The story itself wasn’t bad but it felt poorly paced and a little all over the place.

The narrator did a good job of what he was working with. Some voices he used sounded stereotypical but he did make this book bearable.