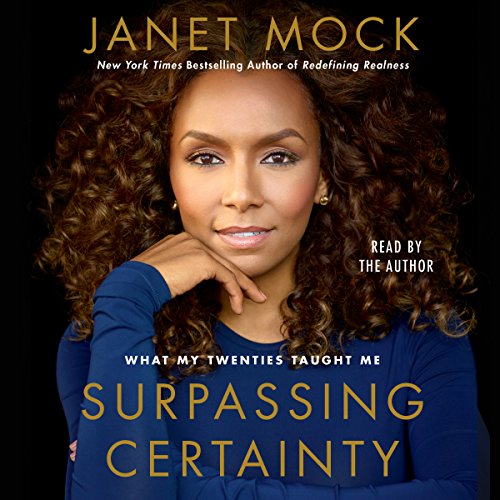 Riveting, rousing, and utterly real, Surpassing Certainty is a portrait of a young woman searching for her purpose and place in the world - without a road map to guide her.

The journey begins a few months before her 20th birthday. Janet Mock is adjusting to her days as a first-generation college student at the University of Hawaii and her nights as a dancer at a strip club. Finally content in her body, she vacillates between flaunting and concealing herself as she navigates dating and disclosure, sex and intimacy, and, most important, letting herself be truly seen.

Under the neon lights of Club Nu, Janet meets Troy, a yeoman stationed at Pearl Harbor naval base, who becomes her first. The pleasures and perils of their union serve as a backdrop for Janet's progression through her early 20s with all the universal growing pains - falling in and out of love, living away from home, and figuring out what she wants to do with her life.

Despite her disadvantages, fueled by her dreams and inimitable drive, Janet makes her way through New York City while holding her truth close. She builds a career in the highly competitive world of magazine publishing - within the unique context of being trans, a woman, and a person of color.

Long before she became one of the world's most respected media figures and lauded leaders for equality and justice, Janet was a girl taking the time she needed to just be - to learn how to advocate for herself before becoming an advocate for others. As you witness Janet's slow-won success and painful failures, Surpassing Certainty will embolden you, shift the way you see others, and affirm your journey in search of self.


As our society becomes more inclusive, some of our most underrepresented communities are getting a much-needed opportunity to tell their stories. For this list, we’ve come up with some of the best trans and nonbinary listens, across all genres and age categories. And because we know that authenticity is important to listeners, our selections are almost exclusively written by queer, trans, and nonbinary authors.

What listeners say about Surpassing Certainty

Be sure to read Janet’s first book “Redefining Realness” before this one, for a deeper understanding of this remarkable young life. I am a “haole” who grew up in Hawaii, so the places and events there that Ms. Mock described revived memories I thought I had lost. I love the articulate descriptions of places, senses and feelings that the author lived. The narration, while not overly dramatic, was articulate, well paced, and sincere. I can’t wait for her next book.

A much needed story...

I’ve never been so sucked in to hearing someone’s story as much as I have with Janet. It took me many years to come to terms with my own trans journey, and hearing how she navigated her twenties through work, school, and love has given me hope for my own journey. I turned 30 in 2020, in the middle of a global pandemic, and the middle of my transition.....listening to her story has renewed my ability to see a future vision for myself, and had inspired me to tell my own story when the time is right. Thank you Janet, for continuing to be an inspiration, an amazing writer, and a queen of the people.
Xoxo- Khloé Klein

A beautiful and hard story continues

Janet Mock introduced us to her growth as a person and public figure in &quot;Redefining Realness&quot;. Where that book was an intro into what it meant to be trans, to be in the public eye and the hardships she experienced, &quot;Surpassing Certainty&quot; is a look into the vulnerable parts of her. The fears that were scrubbed from her first book form the basis for a story where you weep, fall in love, feel protective and want to admonish. Her reading and recounting of these private moments being you closer to a woman who has all eyes on her in our current public sphere.

Janet is a woman whom I greatly admire. Her writing has and will continue to make a massive impact on the lives of trans people, and I'm very grateful to have such an incredible person to look up to.

This was an absolute breeze to read and was full of heart and emotional honesty. While many of the author's experiences are quite different than mine, much of it still felt quite relatable. I think that's the mark of a good writer. I also appreciate that she subtly educates along the way, clarifying some nuances of some marginalized experiences I haven't experienced personally.

good read. alot of self reflective moments while listening to her story. Great job on representation.

At times cringey but good lessons

I came to this book because I like Janet’s podcast but I did not like this book as much as I thought I would. Janet learned a lot in her twenties, and I was cringing along with her as she made all the wrong choices. Worthwhile read but definitely not for someone ending a long term relationship.

Janet is a masterful storyteller. I was engaged from the very beginning. Her voice is also incredibly calming.

I would definitely recommend this to a friend.

Every page is a revelation. Thank you, Janet, for sharing your story so honestly. It feels like a private conversation with a soul mate.

Stunning book. A must read

Janet takes you on a journey that is illuminating and leaves no stone unturned. As a sister to her experience, I found myself often reading about myself.

She is so transparent you cannot help to love her for allowing herself to be so vulnerable especially being an unconventional woman. She has more class, dignity and integrity than most woman I know.

I was actually disappointed when the book finished. I eagerly await her next.

really enjoyed the book but occasionally it wandered into the realms of erotica. which is not for me.
great story brilliantly read by Janet's beautiful voice.
HIGHLY RECOMMENDED

The Inspiration I needed do get through my own twenties

An Invitation to Janet's Experiences

I listened to the audiobook and loved it. Listened to it in 2 x 4 hour blocks. Janet is such a storyteller, divulging some of her most personal and formative experiences and inviting the readers to bear witness to them. Yes, it was a story that had love, had heartache, had tragedy, had trauma, had hardship and resilience, but ultimately, it is the story of a human being and her experiences.

Janet's earnest honesty and lyrical prose is all the more enjoyable read in her own voice. An incredible story of a phenomenal woman.