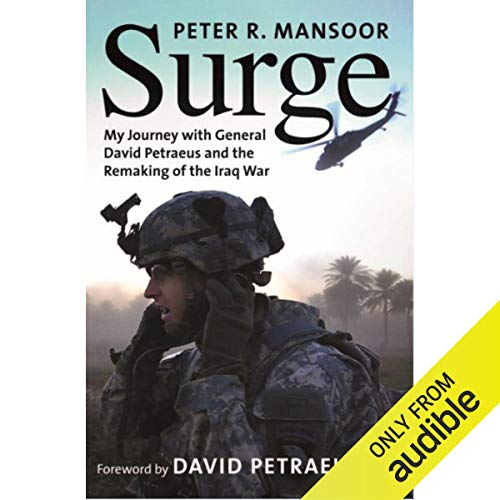 Surge is an insider's view of the most decisive phase of the Iraq War. After exploring the dynamics of the war during its first three years, the book takes the listener on a journey to Fort Leavenworth, Kansas, where the controversial new U.S. Army and Marine Corps counterinsurgency doctrine was developed; to Washington, D.C., and the halls of the Pentagon, where the Joint Chiefs of Staff struggled to understand the conflict; to the streets of Baghdad, where soldiers worked to implement the surge and reenergize the flagging war effort before the Iraqi state splintered; and to the halls of Congress, where Ambassador Ryan Crocker and General David Petraeus testified in some of the most contentious hearings in recent memory.

What listeners say about Surge

Helpful for the Army War College

Really enjoyed this audible book. I’m reading it for the War College and hearing the words added so much more to my absorption of the information.

The Best book on Counter Insurgency

Provides a clear & concise explanation of the complexity of counterinsurgency.
Highly Recommended to those willing to understand future COIN operation.

A Good History Of This Part Of The Iraq War

This is an good history of the surge, an tactic that was working, I ask myself why they didn't stick with it, as when they left Iraq, the sectarian violence was still ongoing

Mansoor has done a superb job of mixing his personal experience and observations of his him at MNFI with his classically trained academic's ability to research within the contemporary records. His analysis of the Surge is both detailed and easy to follow.

Would recommend this to anyone looking for a good single volume examination of the higher level policy and military strategy that guided the later stages of the war in Iraq.