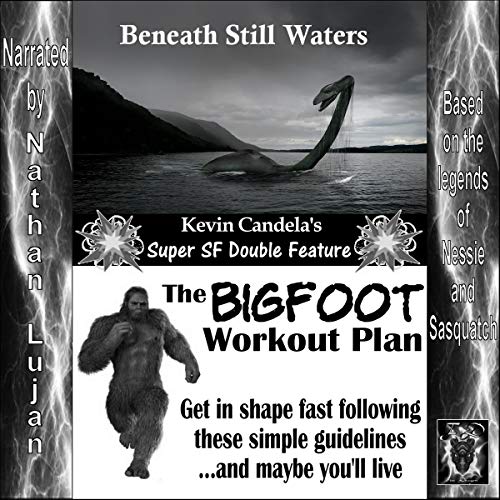 By: Kevin Candela
Narrated by: Nathan Lujan
Try for $0.00

Welcome to the fifth "drive-in double feature" from the writer of the previous four, A Year in the Borderlands and Krakenstein creator Kevin Candela.

In these two "inspired by actual accounts" but still entirely fictional tales, a pair of challengers of the unknown go one on one with two of the world's most famous mysterious legends.

In "Beneath Still Waters", a lake-dwelling giant creature draws a devoted paranormal investigator into a staggering encounter that goes far beyond a blurry photo of something with a long neck and humps passing by a Loch Ness excursion boat.

Then in the humorous "The Bigfoot Workout Plan" (disclaimer, this is not intended to get you in shape unless laughing counts as exercise), a different paranormal investigator vaguely discusses the types of and values of fitness while recounting a funny-unless-it-happened-to-you saga of being persecuted, teased and "hunted for sport" from personal experience.

Fifth in the Super SF Double Feature series, following "Suckers"/"Lost Horizons Travel Agency", "Shore Leave"/"Rasputin" and "Fulcanelli Ain't Dead, Children of the Coming World"/"Mars One" and "Vapor"/"Chiller". Expect more but get caught up in the craziness now with these five double features.

What listeners say about Super SF Double Feature: Beneath Still Waters and The Bigfoot Workout Plan

These two clever little stories are humorous takes on earthly creature legends. The narrator definitely bought in to the atmosphere of these tales. Amusing stories; inspired narration.