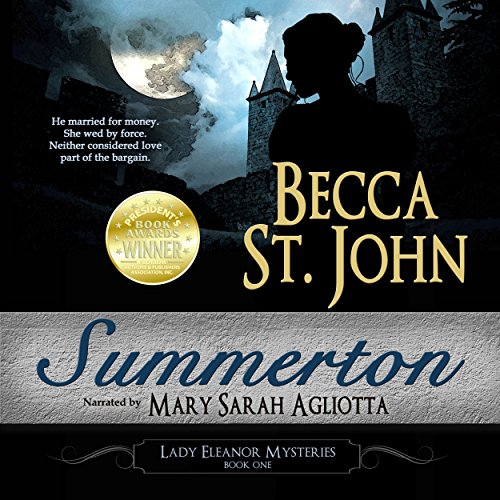 He married for money, she wed by force. On the brink of losing everything, the Duke of Summerton marries heiress Caroline Howlett, but at what cost? She wants neither his crumbling estate nor his title, and what is he, as a man, without them? Before he can resolve this dilemma, something more dangerous than doubt threatens their marriage. When Caroline said she'd rather be dead than married to the duke, she hadn't meant it literally. Forced into marriage by her guardian, Caroline doesn't give a fig for the idle life of the aristocracy. She wants to run her father's enterprises, and she will, once dead bodies stop getting in the way. Aided by Summerton's widowed aunt, amateur sleuth Lady Eleanor, the duke and his reluctant bride scramble to discover just who is trying to kill them. Neither considered love part of the bargain.

What listeners say about Summerton

What would have made Summerton better?

A better narrator. There are so many good narrators with a british accent. This fake accent was terrible. The narrator kept pronouncing Aunt as Ont. Every word with an "a" and "o" were poorly pronounced. I have relatives from England and none sound like this. Her fake accent kept taking me out of a good story.

It was a good mystery, as it kept you guessing throughout the book.

Would you be willing to try another one of Mary Sarah Agliotta’s performances?

No, she should not do british accents. She should probably stick with contemporary novels situated in the U.S.

What character would you cut from Summerton?

All of the characters were necessary. They provided a rich group of people that contributed to the story.

I really wish the narrator was better. I think this is a good book and now I don't know if I can continue with the series, as it's the same narrator. Ireally liked this book and the story was exciting..but I won't be reading any of the others in the series, which is a disappointment. This is an example of how a bad narrator can ruin a novel and in this case a series.

The book was okay in the beginning but the closer I come to the ending the more I questioned the Carolyn. She seemed to be a strong minded, intelligent and independent woman at first but as the story kept going and problems built up she became less sensible and did dumb things. I don't know if the author tried to make her character as heroine to tried and face the dangers alone when she was sent away by her husband to keep her safe. To me she just seen as stubborn, unreasonable, and reckless without a plan and just jumped head into danger. It was not surprising with how the outcome turned out, but it was just disappointing to have it turned out as I predicted. Instead of helping, she turned into the victim and the bad guy only got away again and again. it's become a cliche, actually. I hope the author could make the main character less of the victim and use her intellectual and intelligent to think of plans better for solving problems next time, since we the the villains she put out have stronger strength. So far the story was not as good as I hope it would be. but please don't let my opinion spoil your interest, listen for yourself. Who knows? maybe you enjoy the story more than I did. As that being said I was struggling to finish the whole story due to reason I mentioned earlier, but one thing for sure I wouldn't listen to it again.

I really enjoyed this listen. The story kept me engaged and interested in the outcome. It was fairly well written although the editing was a bit wonky. There were approximately four different instances whereby the reader repeated a sentence twice, and these were not edited. I am looking forward to listening to the sequel when it becomes available.

An ok book in print, but audible is so bad

This narration of this book made me want to SCREAM. Who though this was a good idea?

However, I gave the book a try in kindle and liked it better. .I liked Lady Eleanor, but Caroline was very unlikable: bratty, proud, and silly. Story kept lurching forward and left and right with no clear motivation for the drama (picture the back of my hand to my forehead).

Still I did go on to book 2 (kindle) and am hoping to borrow a kindle version of book 3. They are easy reads, and I keep hoping for more story focus on Lady Eleanor herself--she is written well and is quite interesting.

couldn't put it down

I'm rushing to get the next one in the series.
the author kept me wondering till the last chapter.