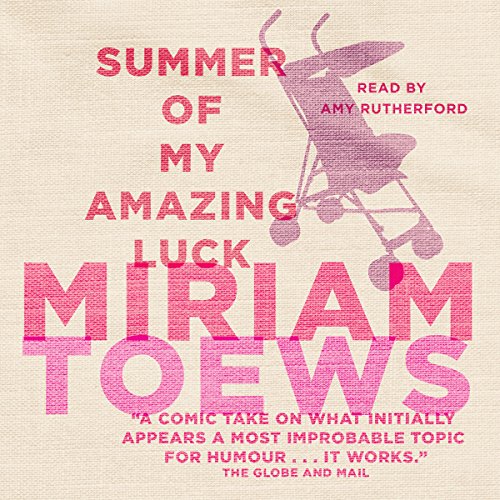 Summer of My Amazing Luck

By: Miriam Toews
Narrated by: Amy Rutherford
Try for $0.00

Lucy Van Alstyne always thought she’d grow up to become a forest ranger. Instead, at the age of 18, she’s found herself with quite a different job title: single mother on the dole. As for the father of her nine-month-old son, Dillinger, well...it could be any of number of guys.

At the Have-a-Life housing project - aptly nicknamed Half-a-Life by those who call it home - Lucy meets Lish, a zany and exuberant woman whose idea of fashion is a black beret with a big silver spider brooch stuck on it. Lish is the mother of four daughters, two by a man on welfare himself and twins from a one-week stand with a fire-eating busker who stole her heart - and her wallet.

Living on the dole isn’t a walk in the park for Lucy and Lish. Dinner almost always consists of noodles. Transportation means pushing a crappy stroller through the rain. Then there are the condescending welfare agents with their dreaded surprise inspections. And just across the street is Serenity Place, another housing project with which Half-a-Life is engaged in a full-on feud. When the women aren’t busy snitching on each other, they’re spreading rumours - or plotting elaborate acts of revenge.

In the middle of a mosquito-infested rainy season, Lish and Lucy decide to escape the craziness of Half-a-Life by taking to the road. In a van held together with coat-hangers and electrical tape and crammed to the hilt with kids and toys, they set off to Colorado in search of Lish’s lost love and the father of her twins. Whether they’ll find him is questionable, but the down-and-out adventure helps Lucy realize that this just may be the summer of her amazing luck.

Miriam Toews’s debut novel, Summer of My Amazing Luck opens our eyes to a social class rarely captured in fiction. At once hilarious and heartbreaking, it is inhabited by an unforgettable and poignant group of characters. Shortlisted for both the McNally Robinson Book of the Year Award and for the Stephen Leacock Memorial Medal for Humour, it also earned Miriam the John Hirsch Award for the Most Promising Manitoba Writer.

“A comic take on what initially appears a most improbable topic for humour...it works.” (The Globe and Mail)

“In a style rather like Barbara Kingsolver, Toews has her characters find a way to make joy in their lives.” (Winnipeg Free Press)

What listeners say about Summer of My Amazing Luck