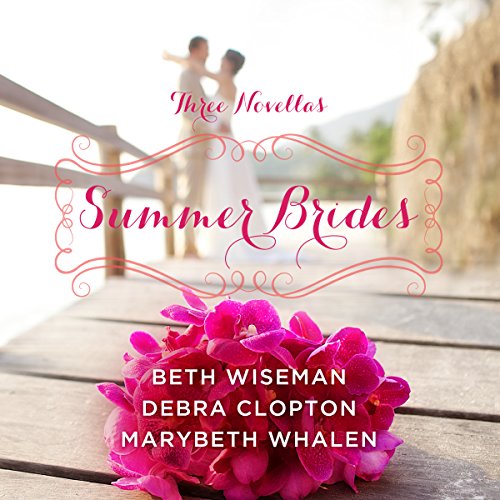 Happily ever after begins today. The honor of your presence is requested at three summer weddings....

A June Bride by Marybeth Whalen: Wynne Hardy never thought she'd get engaged on a reality TV show, but when she met Andy the two of them hit it off. Now he's asked her to marry him, and they're all set to wed on live TV in a seaside ceremony. But just as Wynne thinks all her dreams are coming true, her ex-boyfriend walks back into her life at the worst possible time. Steve broke her heart years ago, and she's still sorting through her feelings for him.

Will Wynne go through with her televised wedding and be the perfect June bride the network is seeking?

A July Bride by Beth Wiseman: It was the happiest day of her life when Alyssa Pennington walked down the aisle to be united with the man of her dreams. But when Brendan left her at the altar, Alyssa was consumed by humiliation, embarrassment, and a broken heart that wouldn't allow her to trust anyone. Brendan Myers knows he will spend the rest of his life regretting what he did to Alyssa, the only woman he's ever loved. Now he plans to win her back. But winning back his bride might prove much more difficult than he can imagine.

An August Bride by Debra Clopton: After a cowboy broke her heart, Kelsey Wilcox traded in her boots for flip-flops and a bistro on the beautiful sandy beach of Corpus Christi. Two years later, still not believing in happy endings, she is about to endure a weekend of torture at her cousin's beach wedding. Brent Corbin has had his share of bad luck with women and isn't looking for love or looking forward to the weekend of wedding festivities as a groomsman for his friend, but Kelsey instantly captures his attention.

Thrown together through the weekend, and with the meddlesome encouragement of some matchmakers, Brent is determined to pursue Kelsey and change her mind about cowboys.

What listeners say about Summer Brides

The stories were pretty good, but the narration was not good. I ended up not finishing the last story. The first two narrators were painful to listen to. Finally, they didn't get much better, so I gave up.

June Bride This was not a bad story of Wynne as she takes part in a tv show that should end in her wedding. However she is not sure if she is making the right decision. It was an ok story but think that we didn't get to really know the characters enough before the end of the story. Was not surprised by the end of the story was a ln easy listen. ( 3 stars) July Bride I'm a bit unsure about this book. I liked the three main characters in a way but also found them annoying as they took ages to be honest with each other. Really found myself rooting for Brenden as we seemed to learn alot more about him rather than Dolton. It was an alright story but didn't enjoy it as much as the first book. Do not think I will read other books from this author. (2 stars) August bride I really enjoyed this story, definitely my favourite in the book. Story is about Kelswy who has sworn off cowboys. Then gets rescued from drowning by Brent a cowboy. Its instant attraction which Kelsey is determined to resist. Definitely a story I will listen to again and an author that I will definitely read more of. (4 Stars)